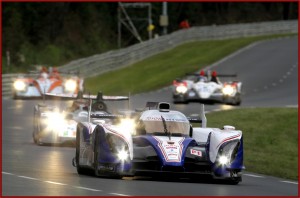 Both Toyota hybrids set their best times on the last lap before the la Sarthe circuit closed at midnight.

André Lotterer in the #1 Audi R18 Quattro hybrid set the fastest lap at Le Mans of 3m 23.787s in the final qualifying session on Thursday night running under favorable warm and dry conditions. The R18 beat the best time of 2011 by nearly two seconds. The hybrid will share the first row of the grid with the conventional – if you can call a V6 all-wheel-drive racecar conventional – #3 Audi R18 ultra of Dumas-Duval-Gené that was 0.291s slower.

However, Toyota in its first big time endurance race in years split the two Audi hybrids by putting its #8 Davidson-Buemi-Sarrazin TS030 hybrid in third position on the starting grid – just 1.055s off the leading pace, and in front of the second Audi Hybrid entry.

Le Mans record winner Tom Kristensen in the number #2 Audi R18 hybrid set the fourth-fastest lap (3m 25.433s) behind the quickest hybrid vehicle from Toyota. He was followed by the other Toyota TS030 hybrid in fifth, the #7 of Alex Wurz, Nicolas Lapierre and Kazuki Nakajima.

“Two cars in the top five is a real achievement for this team’s first race, on only our third day on track at Le Mans,” said Yoshiaki Kinoshita, Toyota Team President.

Yes, the Toyota LM P1 class cars are competitive, but the challenges of the endurance race are formidable, including longevity (last year saw the winning Audi R18 complete 355 laps around the 8.469 mile circuit for a total of 3006 miles), changing weather conditions, and the overtaking of slower cars, with a grid of 56. Repairs were required on both Toyota cars during the two qualifying sessions  to fix electrical glitches. In a dramatic demonstration of racing competence, both Toyota hybrids set their best qualifying times on the last lap just before the la Sarthe circuit closed at midnight.

Still, Audi is the favorite since it has dominates Le Mans in recent years, including an overall victory last year for a total of ten, which means Audi now has one more victory than Ferrari, although Porsche still holds the factory record with 16 and has announced a return in a couple of years. After 2000, 2001, 2002, 2004, 2006 and 2011, this marked the seventh pole position for Audi at Le Mans. Each time, Audi occupied both spots on the front row with identical diesel cars. Now two different technologies will in a sense race against each other.

“This is just a very small step,” said Wolfgang Ullrich, the head of Audi Motorsport. “The much bigger task is still ahead – the race.”

Not all of the tough racing excitement will come from the unlimited prototypes. Ferrari in LM GTE Pro with Frédéric Makowiecki (#59 Ferrari 458 Italia) set the fastest position in qualifying in that class. However the top five cars were within seconds of each other with the Ferrari followed by Aston Martin, Porsche, last year’s class winner Corvette, and another Ferrari.