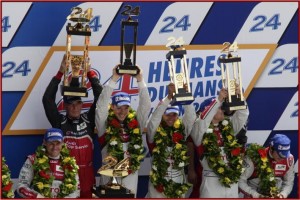 In a race marred by accidents, two Audi diesel hybrid P1 cars took first and second at the 24 hours of Le Mans, with another Audi in third. A Toyota-powered Lola took fourth, boldly inserting itself ahead of the fifth place car – another Audi diesel, but not good enough to prevent an all Audi podium. At various times on the la Sarthe circuit, all four Audi R18 cars could have won what became the brand’s eleventh Le Mans victory in front of a claimed 240,000 spectators.

Toyota, though it did not finish, provided a strong challenge to Audi with its two hybrids and posted some of the fastest racing laps. This impressive early performance was marred by a lapped Ferrari in the GTE Am class that pulled into an overtaking Toyota at the end of the famed Mulsanne Straight where Toyota cars reached a top speed of more than 330km/h. The Ferrari punted the #8 Toyota off the track into a tire barrier, breaking the back of driver Anthony Davidson, who, along with co-drivers Stéphane Sarrazin, and Sébastien Buemi, was challenging Audi in Toyota’s first Le Mans race of this century.

At one point Toyota briefly led, but after the accident one-quarter of the way through the grueling contest, the remaining #7 (Alex Wurz, Nicolas Lapierre, Kazuki Nakajima) Toyota TS030 hybrid spent much time in the pits, first with an alternator problem; then finally retiring with an engine failure after 10-and-a-half hours. In total, 21 of the 56 cars that started the race retired, including the Nissan DeltaWing, also knocked off the track by a faster overtaking car.

In P2, winners were the American-based Starworks Motorsport, led by Peter Baron. Despite there being beaucoup Nissan-powered Orecas in the class, they were one of just two HPD-Hondas that lasted. 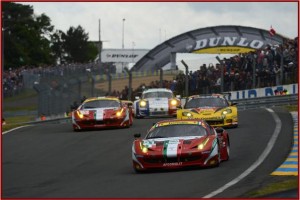 “Italy has returned to winning ways at La Sarthe with a victory that came from an Italian team, thanks to the talents of a predominantly Italian driver line-up. I am proud therefore that Ferrari has contributed to delivering this really important result,” said the head of AF Corse

In GTE Pro, Il Cavallino Rampante carried off a dominant victory, with the #51 AF Corse Ferrari 458 Italia driven by a trio of Scuderia Ferrari test and development drivers Giancarlo Fisichella, Gianmaria Bruni and multiple GT-championship winning Corse Clienti driver Toni Vilander. The Chevrolet Corvettes, including last year’s class winner, had a disastrous outing plagued by failures and pit stops but were still running at the finish.

Things were better for Chevrolet in GTE Am(ateur). Larbre Competition running a Corvette C6.R fought off tough competition from the IMSA Performance Matmut Porsche for most of the race, and ultimately prevailed to take their third consecutive class victory at the 24 Hours of Le Mans.