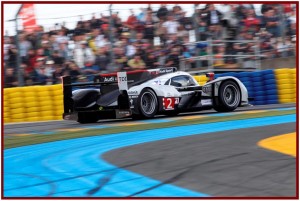 In a tightly fought 24 hours of racing with sporadic rain, wrecks and attrition, a diesel-powered Audi R18 won the 24 hours of Le Mans in the fastest, factory run P1 class. Audi was followed by four Peugeot 908s. The three drivers of the second place Peugeot – Simon Pagenaud, Pedro Lamy and Sebastien Bourdais – competed to the very end as their 908 was only 13 seconds behind.

There were tears in the French team’s eyes as they stood on the podium accepting the second place trophy, one that many excellent sports car racers spend their whole careers failing to obtain. They trailed what was the only Audi race car remaining after two serious crashes in the first third of the race eliminated the other two Audi entries.

Both of the Audi drivers behind the wheel at the time their cars were destroyed – literally into pieces – were unhurt since the required safety capsules surrounding them worked.

It was the tenth Audi victory at Le Mans, one more than Ferrari. Porsche still holds the factory record with 16. Since Porsche is now owned by Volkswagen Group, which also owns Audi, some potentially contentious racing and marketing budget allocations might be ahead.

In the P2 class for private teams, which often use former factory cars, two Nissans, followed by a Lola Honda had podium finishes. Olivier Lombard took the chequered flag as P2 winner in the Zytek Nissan of Greaves Motorsport. In second place was the Oreca 03 Nissan of the Signatech Nissan team of Lucas Ordonez, Franck Mailleux and Soheil Ayari. Third was the Level 5 Motorsports team from the United States in a Lola coupe with a Honda performance engine. It was driven by Scott Tucker (U.S.), Christophe Bouchut and Joao Barbosa.

In the “amateur” GT class, Corvette again finished first, followed by Porsche 911 RSR. The Cinderella story of the race was a privately run Robertson Ford GT40 – taking third on the wedding anniversary of David and Andrea Robertson, the team owners.

Of the 55 cars that started the race, 28 finished. Click here for full results.