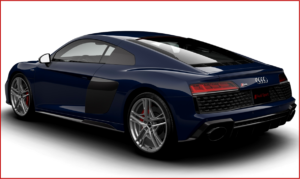 Cars are an endangered species as people flock to trucks.

Audi of America says a limited edition of 30 R8 V10 quattro models marks the end of the ten-year run of the R8 V10. The units bring technologies and other items previously reserved for the performance version and adds different interior and exterior design elements. The limited edition R8 V10 quattro is scheduled go on sale this summer with an MSRP of $186,000 for the Coupe and $195,900 for the Spyder.

The R8 V10 performance model will continue for the 2021 model year, but given the ongoing global economic crisis, Covid 19 plague, and that most governments increasingly are taking legislative action against global warming and CO2 output – it clearly is on the endangered species list. It could survive only as a model for e-racing simulations.

With the same naturally aspirated V10 engine found in the R8 LMS racecar, all-wheel drive, and a normal cabin, the R8 is the highest performance Audi, with no other model with a closer tie to racing. With a seven-speed dual-clutch auto transmission, which can shift gears in as little as 120 milliseconds, the R8 V10 quattro reaches 60 mph in 3.4 seconds. The engine is rated at 562 horsepower and 406 lb.-ft. of torque. It has a top track speed of 201 mph for the Coupe, or 0-60 mph in 3.5 seconds with a top track speed of 200 mph for the Spyder.

The sport exhaust system, previously only available on the R8 performance variant, amplifies the full-bodied sound of the V10 engine, which the driver can adjust using the dedicated satellite button on the steering wheel or via the Audi drive select setting.

Coupe variants will be offered in the following Audi exclusive paint colors: 15 in Mugello Blue with pastel silver interior, five Avus Silver with black interior and red stitching, and five Sonoma Green with black interior and gray stitching. Five Spyders will be offered solely in Mugello Blue with pastel silver interior. All variants include Audi floor mats, with piping and stitching color-matched to the interior. The 20-inch milled wheels are finished in silver for the first time on an R8 in the U.S.

In the U.S., Audi of America sold just over 224,000 vehicles in 2019 and launched the brand’s first fully electric vehicle, the Audi e-tron – one of four fully electric models coming to the U.S. market in the next two years. Globally, the brand aims to be CO2 neutral in thirty years.