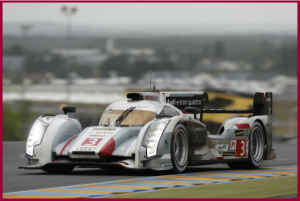 The three Audi R18 e-tron quattro cars equipped with an electrically driven front axle, were the fastest vehicles in the 2013 Le Mans field throughout the entire race.

During a speech at the CAR Management Briefing Seminars, Audi of America President Scott Keogh claimed the culture infusing the Audi Sport racing teams is what’s needed mindset to establish luxury market edge. Whether true or not, there has been a 92% improvement in Audi U.S. sales since 2004.

Keogh said that Audi expects to set a new  annual U.S. sales record of more than 150,000 vehicles during 2013. If accurate, it would be the fourth consecutive full-year record for the luxury car brand and compared with the 77,917 vehicles sold less than a decade ago. Globally, auto analysts estimate that Audi and Porsche are responsible for the majority of Volkswagen Group profits.

The Volkswagen Group was bit by the Eurozone crisis as Q2 profits sank 11% in Q2 to €2.85 billion or ~$3.78 billion. Europe’s largest automaker by far, headquartered in Germany, Europe’s largest economy by far, has revised full-year estimates down to simply equal the €11.5 billion it reported for 2012. (Volkswagen Group Euro-Bit. Q2 Profits Drop 11% to €2.85 Billion)

Things are much better in the recovering U.S. auto market where Audi recently reported that July was its 31st month of record sales.

Keogh claimed the key to these results is the Audi longstanding commitment to motorsports as a proving grounds for advanced technologies, engineering refinements and a lean organization approach to developing premium customer cars.

Racing of course in an Audi tradition all the way back to the Silver Arrow Grand Prix racers of the 1930s, and includes the Pikes Peak rally cars of the 1980s, and more recently Audi winning 12 of the past 14 Le Mans 24-hour endurance races.

“If you race, but only race, all you’ve done is define a motorsports team,” Keogh explained. “But if your top priority is to transfer technology and integrate the lessons from racing, then you have defined an entire company. This is why Audi races and it captures our clear view on the value of motorsports.”