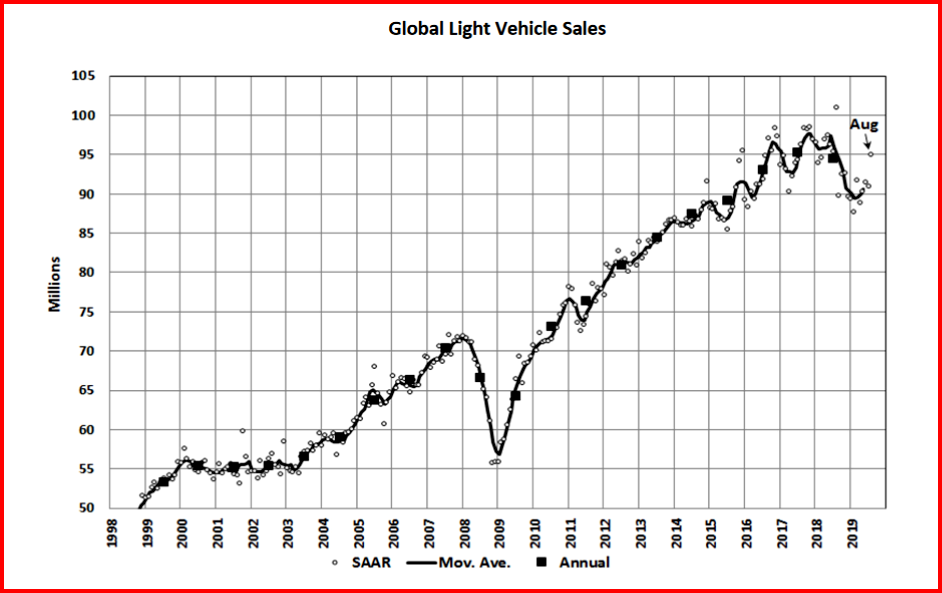 Trump’s economic whims are the cause of the prolonged US-China trade conflict, and a slowing economy continues to present a major risk to the automotive market.

Global Light Vehicle (LV) sales fell 3.9% in year-on-year (YoY) terms in August, but the selling rate accelerated to 94.9 mn units/year, from 90.9 mn units/year in July, according to the LMC* consultancy. However, in a whistling past the graveyard qualifier, LMC notes that “the selling rate was the strongest since August 2018’s WLTP-distorted result, though additional WLTP requirements may have contributed to the surge in Europe’s selling rate in August 2019 as well.” (WLTP How Does It Work? Will it Work?)

Elsewhere, selling rates in the USA and China appear stabilized. “However, in YoY terms, China is still firmly in negative territory, while the US comparison was positive, helped by calendar effects. Meanwhile, August brought some renewed weakness in South America, too.” (AutoInformed: July Global Vehicles Sales Drop More Than 3M)

Western European LV sales fell -7.2% YoY in August, but this was chiefly due to a high base effect linked to the implementation of WLTP in September 2018, which pulled sales forward to August last year. In August 2019, the selling rate increased to 19.1 mn units/year, as a number of markets saw much higher sales volumes than anticipated. LMC believe that further changes to WLTP from 1st September 2019 may have prompted OEMs and dealers to self-register cars in August, contributing to the exceptional selling rates seen, particularly in markets such as Germany and the UK.

The car selling rate in Germany was 4.3 mn units/year, while the equivalent figure for the UK was 3.1 mn units/year.

Russian LV sales fell 1.3% YoY in August, while the selling rate picked up slightly to 1.6 mn units/year (from 1.5 mn units/year in July). Although this was below the lMC forecast, it is still a “disappointing result in a market which is down -2.3% YoY for the year to date.” With economic growth looking increasingly weak, even the government’s incentive scheme appears unable to provide any significant stimulus to the market. There is now a possibility that 2019 Russian LV sales will fail to grow YoY, interrupting the recovery that started in 2017.

According to preliminary data, the Chinese market might be regaining momentum. The selling rate exceeded 27 mn units/year for the third consecutive month in August, averaging 27.2 mn units/year between June and August. “That is significantly higher than the average selling rate of 24 mn units/year in the first five months of this year and is only slightly below last year’s total LV sales of 27.7 mn units. On a YoY basis, however, sales declined by nearly 8% in August, the 14th consecutive month of decline,” says LMC

Sales (i.e., wholesales) in H1 2019 were undermined by aggressive destocking at dealerships prior to the launch of vehicles that are compliant to the new State VI emission standard. Now that an increasing number of automakers and regions in the country are launching State VI-compliant vehicles, consumers are returning to dealerships. In fact, State VI vehicles are contributing to the recent sales growth. Nonetheless, the prolonged US-China trade conflict and a slowing economy continue to present a major risk to the automotive market.

In Japan, the buying rush ahead of the consumption tax hike on 1 October this year has been limited so far, as consumers are increasingly worried about their retirement prospects and global uncertainty. The government’s measures to cushion the impact of the tax hike on vehicles are deterring sales, too. The August selling rate of 5.7 mn units/year was up 9% from July, but still lackluster.

The selling rate in South Korea increased to 1.73 mn units/year in August. On a YoY basis, however, sales fell by 6.5%, the seventh consecutive month of decline. The darkening export outlook and the weakening job market continue to undermine consumer and business confidence.

August LV sales in Brazil fell by -4% YoY, the first sizable drop since April 2017. However, seasonality is partly to blame, with one fewer selling day available in August 2019. The daily sales rate was up from July (10,487 versus 10,097 units/day), and the annualized rate was 2.6 mn units/year, little changed from July.

A rocky August both politically and financially caused Argentinian LV sales to tumble by 33% YoY, to just 42k units. This corresponds to an annualized selling rate of 450k units/year, 89k units/year fewer than July. The average YoY decline seen through the first seven months of the year was -46.5%.

*LMC Automotive is part of the LMC group. LMC is the global leader in economic and business consultancy for the agribusiness sector. For further information about LMC Automotive visit www.lmc-auto.com.

Ken Zino is an auto industry veteran with global experience in print, broadcast and electronic media. He has auto testing, marketing, public relations and communications expertise garnered while working in Asia, Europe and the U.S.
View all posts by Ken Zino →
This entry was posted in auto news and tagged auto industry commentary, autoinformed.com, automotive blog, Ken Zino, lmc. Bookmark the permalink.