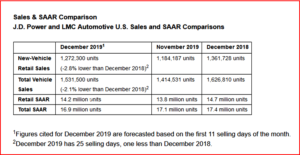 New-vehicle retail sales in December are expected to be down from a year ago, according to a forecast by J.D. Power and LMC Automotive. Retail sales are projected to reach 1,272,300 units, a -2.8% decrease on a ‘selling day adjusted’ basis compared with December 2018.

Worse, reporting the same numbers without controlling for the number of selling days translates to a decrease of -6.6% vs. last year since December 2019 contains one less weekend and one less selling day than December 2018. New vehicle retail sales for the 2019 calendar year are projected to reach 13,717,600, a -1.7% decrease compared to 2018.

Total sales in December are projected to reach 1,531,500 units, a -2.1% decrease on a selling day adjusted basis compared with December 2018. Reporting the same numbers without controlling for the number of selling days translates to a decrease of -5.9% over last year. 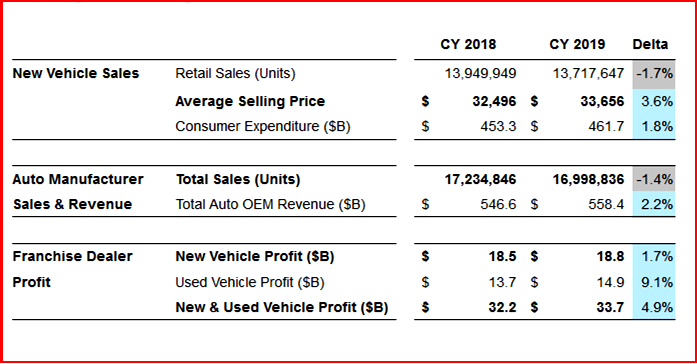 “December’s soft performance closes the year on a down note, but another record for transaction prices reinforces that manufacturers are producing the type of vehicles that consumers want in the market,” claimed Thomas King, President of the Data & Analytics Division at J.D. Power. “Record prices, however, have also been accompanied by record incentive levels, which signifies that there is still too much supply relative to overall demand.”

Concurrently, average incentive spending per unit is on pace to reach a record $4,600, an increase of 6.9% (+$296) from a year ago. The previous high for the industry was set last month at $4,520. Overall spending as a percentage of MSRP also remains close to 11%, the highest level since the recession in 2008. Among the 25 top-selling brands in the industry, all but four are expected to show an increase in overall spending.

“Looking at the entire year, annual retail sales will reach more than 13.7 million units in 2019. This represents the 10th-best retail sales year in history and a modest 232,000-unit decline from last year,” King said. “With transaction prices continuing to show robust growth, consumers will spend a record amount of money on new vehicles in 2019.”

The combination of record prices with overall sales means that consumers will spend $462 billion on new vehicles in 2019. This is up $8.4 billion from last year and marks the first time that expenditures will exceed $460 billion.

Looking ahead to 2020, more than 60 new or refreshed models are expected to be introduced, which Power claims should help mitigate further degradation in overall sales. This could also result in smaller slices of the same size pie for models.

Ken Zino is an auto industry veteran with global experience in print, broadcast and electronic media. He has auto testing, marketing, public relations and communications expertise garnered while working in Asia, Europe and the U.S.
View all posts by Ken Zino →
This entry was posted in economy, news analysis, sales and tagged 2019 US Auto Sales, auto industry commentary, autoinformed.com, j.d power, Kenneth Zino. Bookmark the permalink.