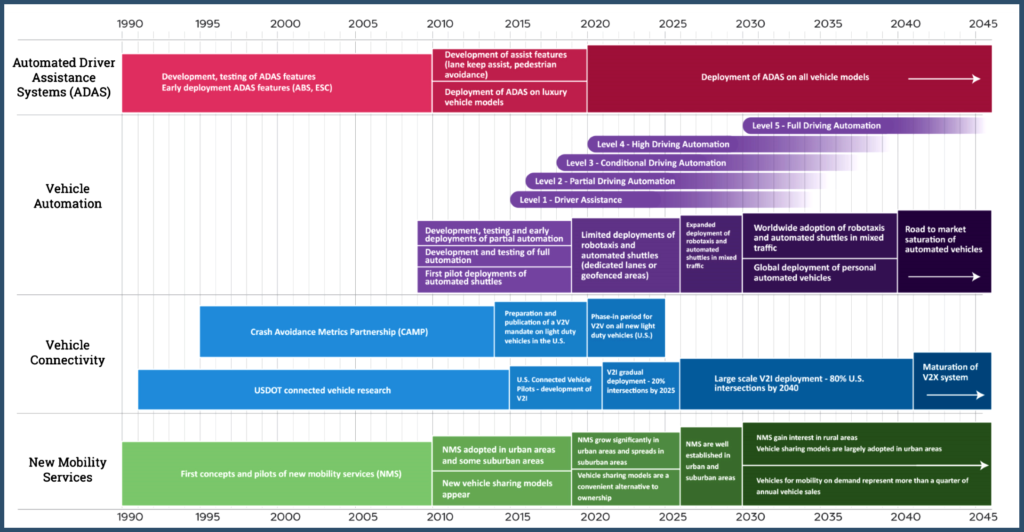 It seems a week doesn’t pass without the announcement of the latest technology or partnership or production vehicle that points the way to the Holy Grail of the automaker universe – the super connected and autonomous vehicle. Still, limited appearances start this fall with the Google autonomous car roving  Arizona However, it will likely be more than a decade before the vehicles are proven, and acceptable to enough buyers that a mass market, and therefore mass production will begin. This, of course skips a discussion of formidable legal and insurance issues.

More than a year ago in what was billed as the first state to “develop comprehensive regulations” covering autonomous vehicles, the governor of Michigan signed legislation that establishes policies for the testing, use and eventual sale of autonomous vehicles related technologies. (See Controversial Federal Guidelines for Autonomous Vehicles Out)

The law establishes the Michigan Council on Future Mobility, as part of the Michigan Department of Transportation, that will recommend policies to set industry standards. It also will regulate connected vehicle networks and how traffic data, such as vehicle crashes, will be collected and shared. Lobbyists from Fiat Chrysler Automobiles (FCA), Ford Motor, General Motors, Toyota Motor, and Google, as well as ride-hailing companies Uber and Lyft had a large say in the regulations.

It’s been an on again, off again geographic affair, but Ford now officially says it has returned to Detroit with its global electric vehicle organization, Ford Team Edison. The autonomous vehicle business team is also housed in a refurbished former factory located in Detroit’s historic Corktown district.

Planned to begin production in 2021, Ford’s first autonomous vehicles will be designed to move people or goods. As part of an $11.1 billion investment in global electric vehicles announced earlier this year, Ford says it will sell electrified vehicles that “offer exciting experiences and enhanced capabilities based on what people need and want – including the all-new Mustang-inspired battery-electric SUV in 2020.”

Autonomous driving allows for more efficient time-management behind the wheel, but you have to give up control and trust in the new technology.

It’s part of a larger auto industry trend that see automakers scrambling for funding and technical expertise to transform themselves into mobility companies – an expensive and risky strategy. The reason for the deal became clearer when GM  announced that all Cadillac models will come with a sophisticated autonomous cruise control that requires no driver input on limited access highways. (See AutoInformed.com on Autonomous Vehicle Nod – Super Cruise on All Cadillacs)

Against this backdrop and with a possible shakeout as devastating as one that occurred in the mobility business more than a century ago as the automobile emerged replacing the horse, it’s not surprising that long established car companies are seeking collaborative agreements to share the risks, cut the cost of research, development and production to survive as some sort of entity when taking an individual road appears one paved with doom.

What in the Heck is ACE?

The Center for Automotive Research notes the automotive industry is changing at a record rate with vehicle technologies such as automated driver-assist systems (ADAS), connected and automated vehicles (CAV), and advanced powertrains coming to market every year. These have the clout to transform both the product and therefore the industry. The question is: do people really want to ride in a mobile I-phone? Time will tell.

Thus, appears a new auto biz acronym – automated, connected, and electric (ACE) automotive technologies that in laughable jargon “will enable new mobility paradigms, new companies, and new business and revenue models that have the potential to alter the way consumers interact with vehicles.”

Perhaps humorous, but also serious since taken together, these new vehicle technologies – and as yet unknown ones – and new mobility services are key to advancing the “shared economy” where – like the Trump tax cuts – not all sharers are equal.

The industry debate is whether the ACES transition is happening in a significant way. Judging by press releases, not automated cars on the road, it’s gradually but most assuredly happening.

In the interim all is preparation for an autonomous day. Consider the following posted on AutoInformed.com: