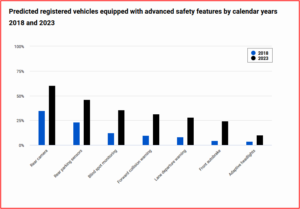 However, it still takes decades for improvements to influence the entire fleet of registered vehicles. Drivers don’t abandon older vehicles when automakers make safer ones.

“The speed at which manufacturers are improving crashworthiness and rolling out new safety features has increased markedly in recent years,” says Matt Moore, senior vice president of HLDI. “But the advancements make their way into the broader fleet at varying rates.” 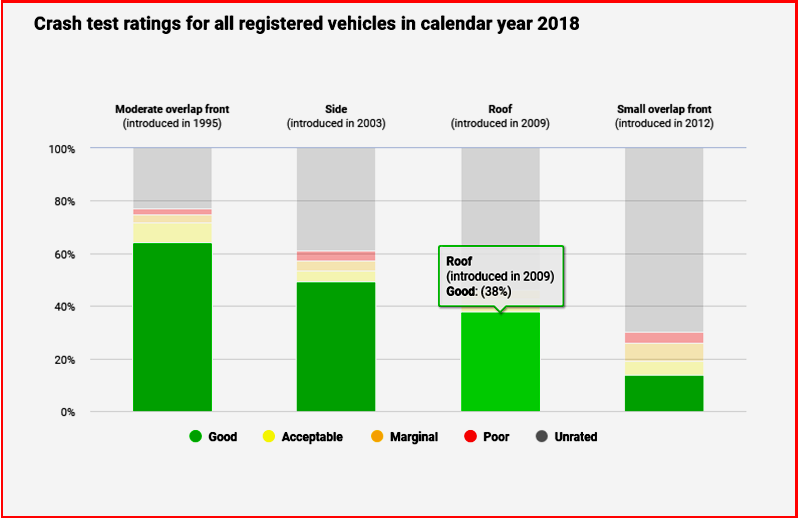 Another study of the speed advanced safety features make their way into the overall U.S. fleet suggests that government mandates and voluntary manufacturer commitments have a powerful impact on the pace of change.

With the exception of curve-adaptive headlights, these features have been filtering into the broader fleet at a faster rate in recent years than happened earlier. But two features that are required by government mandate or slated for universal adoption by a voluntary manufacturer commitment — rear cameras and front autobrake — are spreading even faster since those measures were announced.

Even features that are rapidly becoming more common will take a long time to spread through the registered-vehicle fleet. Only rear cameras, which were first introduced in model year 2002 and are now required on all new vehicles, are expected to be installed on more than half of all registered vehicles by 2023.

The percentage of the fleet equipped with front autobrake, introduced in model year 2006, is forecast to increase nearly five-fold to 24% percent in 2023 from about 5 percent in 2018.

However, curve-adaptive headlights, which, according to HLDI data, lower claim rates, will grow only 1 percentage point a year to reach 10% by 2023.