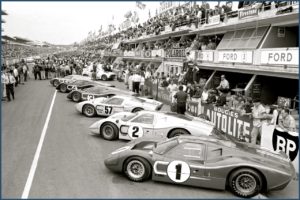 The Automotive Hall of Fame has opened a new display celebrating the accomplishments of Roy Lunn (1925-2017), the engineer who led the creation of the original Le Mans-winning Ford GT40. Lunn was the 2016 inductee.

According to Martyn L. Schorr, Editor of Car Guy Chronicles, “Roy was born in Richmond, England in 1925, one of three children. He earned degrees in Mechanical and Aeronautical Engineering at Kingston Technical College and was a pilot in the RAF. When World War II ended, he transferred to the Royal Aircraft Establishment in Farnborough and worked on the design and development of gas turbine generators for the first Turbo-Jet aircraft.

“He started his automotive career at AC CARS as an engineer in 1946 and, in the late-1940s, he became the Assistant Chief Designer (1947-1949) at Aston Martin and built two DB2s that competed at Le Mans. After three years as Chief Designer and Engineer at JOWETT CARS, in 1953 he joined Ford of England as an engineer and product-planning manager.”

During his 40-year automotive career, Lunn designed post-war sports cars, concept cars and trucks, iconic racing contraptions, four-wheel-drive SUVs and military transports. In 2016, he was inducted into the Automotive Hall of Fame for his contributions to automobile engineering. The exhibit at the AHoF in Dearborn runs through April 12, 2018. Click Here for more info, or visit the Automotive Hall of Fame website for location and times.

Arguably Lunn’s top endeavor was the direction he set for the Ford GT40, which went on to win Le Mans four years straight and contribute to four FIA international titles until a chauvinistic sanctioning body made the cars illegal. Preston Lerner told part of this story in “Ford GT: How Ford Silenced the Critics, Humbled Ferrari, and Conquered Le Mans,” Lunn’s June 1963 memo outlining his vision for a Le Mans-winning race car (“a high-performance two-seater sports car prototype that, if produced in low volume, would neutralize the Corvette image by substantially better performance and by surpassing it in style and feature appeal”) got immediate approval from Ford’s executives.

Lunn was ideal to work for Ford. A former designer and engineer for AC, Jowett, and Aston Martin, he previously led a Le Mans campaign for Aston and his work had led him, eventually, to a position in Dearborn – via Ford of England where he designed the Anglia. In that Detroit suburb, notable for an ultra racist Mayor who obviously did not care for black contributions to the industry, Lunn contributed to the mid-engine 1962 Ford Mustang I.

During his time developing the GT40, Lunn began working with Kar Kraft in Dearborn and helped in Kar Kraft’s construction of the Boss 429 Mustang. After spending a couple years at Kar Kraft, Lunn then became the director of engineering at Jeep, where he contributed to the Eagle line of four-wheel-drive sedans and to the breakthrough and long-lived XJ Cherokee midsize SUV, a segment the mother-truckers at Ford completely missed as their minds were trapped in body-on-frame gas guzzlers that thrive to this day in the F-Series. (See AutoInformed.com on Ford Finally Will Offer F-150 Diesel Engines, Ford GT auctions for $2.5 million. 2019 Mustang Bullitt $300,000)

Lunn retired from the auto industry in 1987 and died last year at the age of 92.

The Hall of Fame’s exhibit on Roy Lunn will include a 1984 Jeep XJ Cherokee, a Superformance replica of a 1968 Ford GT40 Mk1, and a Renault-powered spec racer from 1984 prepared for SCCA racing in addition to artifacts from Lunn’s career and a video of Lunn’s Hall of Fame acceptance speech. The exhibit, separate from the rest of the Hall’s displays, will be free and last through April 1. For more information, visit AutomotiveHallofFame.org.