Porsche might have been the favorite having captured the maker’s championship (Porsche Clinches WEC Manufacturer’s Title at Shanghai) two weeks ago in Shanghai, but Audi put in a strong Bahrain qualifying session, while Toyota once again flubbed it.

The #8 Audi R18 took the first spot on the grid in the FIA World Endurance Championship (WEC) finale, despite an engine change directly before qualifying. Having set the six best times in nine qualifying sessions this year, Audi has dominated qualifying during the 2016 season, the last one it will run in WEC. During the 2015 season, no other car managed to start from the front row of the grid than the Porsche 919.(Audi Dumps World Endurance Cup Racing and Le Mans after 18 Years of Success for Boring Formula E?)

However, qualifying on the pole for a six hour race hardly predicts the outcome in any kind of endurance racing Audi driver Lucas di Grassi, set a lap time of 1m 38.828s, a new record – clocked at 0.842 seconds faster than Timo Bernhard (Porsche) running last year, and 0.511 faster than his quickest rival this weekend – who, again, was Timo Bernhard.

“I’m absolutely happy. This track record in qualifying is amazing,” said di Grassi. “My teammate Oliver Jarvis (GB) delivered the basis for our result by the good time he set.” For the Briton, this means that for the first time in his sports car career, Jarvis clinched a pole position with Audi.

The Porsche Team with its two formidable 919 Hybrids was strong, but not strong enough. Last year’s world champions, Timo Bernhard (DE), Brendon Hartley (NZ) and Mark Webber (AU), will start from second on the grid for the final and ninth round of the FIA World Endurance Championship (WEC). In the WEC the average of the two fastest laps of two drivers counts for the qualifying result.

A set of Michelin slick tires should ideally last two fuel tank fills, say ~72 laps. Refueling and changing tires may only be done sequentially, not at the same time. Only four mechanics may work simultaneously when changing tires, and they can use only one wheel gun at a time. That takes a lot longer than other racing series.

The Porsche sister car, with a chance to take the 2016 drivers’ title, Romain Dumas (FR), Neel Jani (CH) and Marc Lieb (DE), will start third on the grid for the six-hour race on Saturday. For Dumas/Jani/Lieb the six-hour race is solely focused on the drivers’ world championship. They have an advantage of 17 points ahead of the best placed Toyota. Finishing fifth in the race would be enough for them to win the title, even if the #6 Toyota won.

Porsche’s Mark Webber is also facing an emotional race, at least per commentators, since it will be his last one as a professional driver, as the Australian hangs up his helmet at the end of the season.

The mostly hapless Toyota team turned in a mostly frustrating qualifying session. Both TS050 Hybrids pushed too hard in the battle for grid positions with what one can assume were ill-prepared cars on the wrong tires – and not the first time this season. Having waited a few minutes to begin for sandy track conditions to improve, Anthony Davidson started qualifying in the #5 Toyota and looked to have put his car in the fight for the leading positions until his lap time was deleted for being off the course. That left him needing to set another flying lap on the same tires, giving him little chance to challenge for the pole. His subsequent lap was around one second slower than his earlier effort.

That left the #6 TS050 Toyota Hybrid of Stéphane Sarrazin, Mike Conway and Kamui Kobayashi in fifth place as they now challenge to overturn a 17-point deficit on the drivers’ World Championship-leading Porsche #2. Anthony Davidson, Sébastien Buemi and Kazuki Nakajima will start from sixth place in their #5 car when they look to end the season positively at a venue where Toyota has won two of its previous four WEC races. 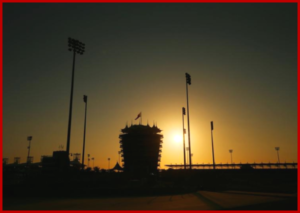 The 5.412-kilometer-long Formula One track in Sakhir will be the third of nine WEC races this year to be held partly in the dark – after Le Mans and Austin. The six-hour race will be green flagged at 16:00 hours local time.

This is an hour later than last year and means the drivers must deal with blinding from the setting sun right from the beginning. At 16:45 hours the sun will disappear behind the horizon.

The slightly cooler tarmac after sunset is welcomed by the Porsche Team, because the competition thus far this year benefits from the heat. In any case, the track has a poor grip because the fine sand from the desert is continuously blown onto it.

Ken Zino is an auto industry veteran with global experience in print, broadcast and electronic media. He has auto testing, marketing, public relations and communications expertise garnered while working in Asia, Europe and the U.S.
View all posts by Ken Zino →
This entry was posted in racing and tagged autoinformed, autoinformed.com, Bahrain, Ken Zino, wec, world endurance cup. Bookmark the permalink.