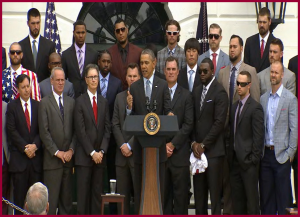 “We’re all on the same team.” And I think Big Papi put it better and more colorfully than any of us could. I won’t repeat his quote. But the point is, Boston and the Red Sox were one this season.”

President Barack Obama’s remarks during the Red Sox visit to the White House today. On opening day this year for the record, the Detroit Tigers won 4-3 in bottom of the ninth against Kansas City and Boston lost to the Baltimore Orioles 2-1:

“Hello, everybody! Everybody, have a seat. Have a seat. I got a few things to say here.

“First of all, it’s great to see you as we kick off the 2014 baseball season. Now, I thought I invited the Red Sox here today, but there must be a mistake because I don’t recognize all these clean-shaven guys. There’s one guy — a couple guys who decided they thought the beard was working for them.

“But beards or no beards, it is an honor to welcome the 2013 World Series-champion Boston Red Sox to the White House. I have to say, you all have some fanatical fans. And many of them occupy my administration and the White House. “Look at my White House photographer — he’s been thinking about this day all week. I got my press secretary there. I am surrounded by Red Sox fans. And I know that there — all the members of Congress from the New England delegation, who are equally fanatic.

“Back in 2004, watching the Red Sox win the World Series was a novelty. But over the past 10 years, this clubhouse has the winningest championship record in baseball — (applause) — three World Series titles in a decade, under the leadership of John Henry, Tom Werner, Larry Lucchino and their partners. And since they won this one at Fenway, the diehards can finally declare that the Curse has definitively been broken. (applause)

“Obviously, all the wins were sweet for Red Sox fans, but I think for the nation as a whole there was something about this particular squad that was special and will go down in history — not just because they went from worst to first, but because they symbolized the grit and the resilience of America’s — one of America’s iconic cities during one of its most difficult moments.

“Nearly one year ago, hundreds of thousands gathered on a beautiful spring day to run and cheer the historic Boston Marathon. But a senseless act of terror turned celebration into chaos, and joy into anguish. Four young people lost their lives. Hundreds were injured. The city was rocked. But under the guiding hand of somebody who I consider one of the finest public servants that America has known, Mayor Tom Menino of Boston, who is here today, and his lovely wife. (applause)

“Boston stood resolute and unbowed and unbroken. And as the smoke cleared, we gained inspiration from the injured who gamely tackled their recovery — those who are running and walking again, including the young woman who has returned to professional dancing with a prosthetic leg. And we took heart from the first responders who put their lives at risk and bravely ran toward danger — people like Officer Richard Donahue of the MBTA Transit Police, who was shot and nearly killed that night. After months of rehab, Richard is walking again and keeping up with his 18-month-old son, and we’re so proud to have Richard here today. Give him a big round of applause. (applause)

“Today, our hearts are in Boston again. We’ve got the families of firefighters Michael Kennedy and Lieutenant Edward Walsh, who gave their lives protecting others from a massive blaze last week. And their sacrifice, like the sacrifice of those made last year, reminds us of the selfless courage of everyday heroes who put their lives on the line to help others. The first responders, the brave citizens, the resolute victims of these tragedies — they’re all Boston Strong. And ultimately, that’s what this team played for last season, and every man behind me did his part to keep the team rolling.

“There was Xander Bogaerts, the upstart rookie who took over at third base and didn’t let up. The tested veterans like my fellow Hawaiian Shane Victorino, and Mike Napoli, who came in during the offseason and shook off the rust and the injuries to secure win after win. Lackey and Lester — the heart of a rotation that upped their game and started begging their manager, John Farrell, to stay in for six and seven and eight innings. And of course, the legend — the only man to play for all three championship teams, the biggest bat in the dugout: Big Papi. (applause) Love this guy. “Even a White Sox fan can appreciate these guys.”

“But for all the big names, this was never a single superstar’s team. If you look at the numbers, no pitcher won more than 15 games; no batter hit more than 30 home runs. And yet, they led the Majors in runs scored, won the most games in the American League, had the second-best ERA in their hard-hitting division. So this team never lost more than three games in a row all season; they just had a lot of heart.

“And it was that consistency that brought the Red Sox into the postseason. But it was a drive to do more for the city that had their backs that took them on to win in the World Series. With the rallying symbol of Boston Strong mowed into the outfield and sewed into their uniforms, the Red Sox took the field against Tampa and Detroit with the full weight of their city behind them. When they found themselves in Game 4 of the World Series, down two games to one against St. Louis, the faithful cheered as Jonny Gomes knocked a three-run homer out of the park, breaking open a tie and giving Red Sox Nation the signal they weren’t done yet. (applause)

“Big Papi let it rip, earned the World Series MVP. (applause) Koji Uehara, the third-choice closer who had been signed as an afterthought, capped one of the best postseasons in Major League history with his signature splitter that sank straight into David Ross‘ mitt to win the World Series, four games to two. And then Koji just looked so happy after every game — didn’t he? — jumping up on people.

“So they all stormed the field, readied the duck boats. But this was more than just a trophy and parade. With every game they played, the Sons of Fenway never forgot what it meant to wear the Boston uniform. When they visited bombing victims in the hospital; when they played ball with kids getting cancer treatment; when they started a program to help wounded warriors get treatment at Mass General — these guys were saying, “We’re all on the same team.” And I think Big Papi put it better and more colorfully than any of us could. I won’t repeat his quote. But the point is, Boston and the Red Sox were one this season.

“And we knew last year, even as we mourned the lost and cared for the wounded and resolved to carry on, that the moment would come when the Sox would be champions again and the crowds would gather for a parade down Boylston once more. And that’s exactly what happened. That’s how this team helped Boston to heal. And true to that spirit, in just a few weeks, something else we resolved last year will come to pass: On the third Monday in April, the world will return to Boston and run harder than ever and cheer louder than ever for the 118th Boston Marathon. That will happen. (applause)

“The bottom line is I’m proud of these guys. As a baseball fan, I appreciate their comeback season. But more importantly, as president, I’m grateful for their character and their embrace of the essential role they played in the spirit of that city. Sometimes, sports seems like it’s trivial, it’s just an entertainment. And then, every once in a while, you’re reminded that sports represents something else and it has the power to bring people together like almost nothing can. And all of you should be very proud of what you accomplished. I know your fans are. And I’m grateful to you as well.

“So congratulations to the Boston Red Sox and Red Sox Nation. (applause) Good luck this season. May the best Sox win.” (laughter and applause)