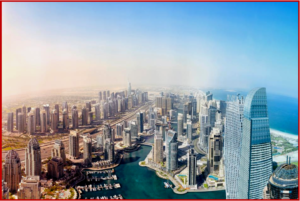 Bentley Motors has uncovered a new Gigapixel photograph, claimed to be one of the world’s most detailed landscape images, with a Bentley Flying Spur W12 S in the luxury marina of Dubai.

Zoom out, and the NASA-derived technology of the Gigapixel image allows one to explore and experience the city panorama in intricate detail, while beyond it the curvature of the earth is visible. Zoom in and the image will take one in sharp focus, through the landscape, right up to the hood ornament of the Flying Spur.

With the new Gigapixel image, viewers can also explore the Flying Spur W12 S inside and out with a 360-degree film narrated by John Paul Gregory, Bentley’s Head of Exterior Design. Gregory talks to the audience from inside the car; the Bentley Suite in the The St. Regis Dubai; and the new flagship Bentley retailer on the Sheikh Zayed road.

Bentley suspended a camera 264 meters up the Cayan Tower – one of Dubai’s tallest buildings – to capture the landscape image. The technology used had to withstand 40-degree heat that created a haze and 25 km/h winds that threatened to disrupt stability. It’s hard to believe 57.7 billion pixels were stitched together to create a single image that also balanced light levels across each pixel. The process took 48 hours and 1,825 frames to create. Downloading the image took a further 18 hours.

Aside from the photo op/p.r. stunt, core to the unique Gigapixel photograph is the Bentley Flying Spur W12 S. The Flying Spur W12 S has enhanced power and torque outputs from a 6-litere twin-turbo W12 engine. Engine power is increased from 625 PS to 635 PS (626 bhp) and torque from 800 Nm to 820 Nm (605 lb. ft.) for a dynamic and effortless drive.

Complementing these power upgrades, a new  suspension tune for the Flying Spur W12 S is said to improve  handling and provide even more traction, while retaining a refined ride.

Ken Zino is an auto industry veteran with global experience in print, broadcast and electronic media. He has auto testing, marketing, public relations and communications expertise garnered while working in Asia, Europe and the U.S.
View all posts by Ken Zino →
This entry was posted in auto news and tagged autoinformed, autoinformed.com, Dubai, Flying Spur W12 S, Ken Zino. Bookmark the permalink.