Beware of Self Interest in Mobility Promotion says NADA 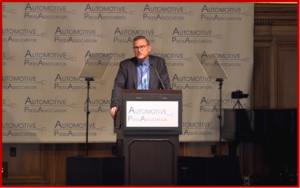 “If Uber and Lyft are dramatically more expensive than personal vehicle ownership, then people aren’t going to stop buying cars, and the auto industry isn’t doomed.”

NADA Chairman Wes Lutz at APA in Detroit this week posed the question if there is enough skepticism in reporting about the auto industry’s headlong rush into the future of mobility, the internet of things and autonomous vehicles. He was particularly irked – and as an auto dealer with as much abundant self-interest as the new mobility soothsayers/stock promoters – by media narratives suggesting that ride-hailing will replace personal vehicle ownership.

Lutz said one of the biggest false narratives is that ride-hailing services like Uber and Lyft are less expensive that personal vehicle ownership. Yet in August, the AAA Foundation for Traffic Safety released a study finding that the cost of relying on ride-hailing services as a primary mode of transportation* in 20 of the biggest metro areas in the U.S. was, at minimum, more than twice as much as the cost of owning a personal vehicle.

“I have to tell you, I think this was one of the biggest auto industry stories of 2018,” Lutz said. “Why? Because it disproves one of the central pillars holding up the argument that people are going to stop buying cars, which is that it’s cheaper to use ride-hailing services. But this study shows exactly the opposite of what we are being force fed. It shows that ride-hailing is substantially more expensive than personal ownership, even of a new car.”

Well, maybe but trade and tariffs, the #MeToo movement and the privacy of personal data arising from auto use and purchases are also big stories this year. In order to bore you in true depth and provide an Aristotelian counter to the alleged non-media skepticism consider: Significant Stories, Trends of 2017. And 2018? and More Significant Stories, Trends of 2017. And 2018?

Lutz went on, “And if Uber and Lyft are dramatically more expensive than personal vehicle ownership, then people aren’t going to stop buying cars, and the auto industry isn’t doomed,” Lutz said. “Instead, people are going to continue doing exactly what they’re doing now: Owning a car or truck for day-in and day-out personal transportation and using ride-hailing services when it makes more sense than driving. That’s not a revolution. That’s an evolution.”

Similarly, Lutz said that the case for autonomous vehicles is built upon the premise that self-driving vehicles will be safer than humans.

“Yes, there were 37,000 fatalities on the roads last year,” Lutz explained. “But Americans drove more than 3.2 trillion miles. That means nearly 90 million are driven in the U.S. for every motor vehicle death. That’s 342 years of driving – 24 hours a day, 7 days a week, 52 weeks a year – between traffic deaths.”

“So here are the questions you should be asking automakers, regulators, and safety advocates right now: What technologies are coming online in the next five years that will reduce driving fatalities, and that don’t involve removing steering wheels, and brake pedals, and humans?” Lutz said.

Lastly, Lutz refuted the narrative that franchised dealers aren’t enthusiastic about selling electric vehicles by questioning the assumption that dealers stand to lose out on service revenue.

“First, let me make it abundantly clear: I want to sell anything my customers want to buy. Period,” Lutz said. “If there’s demand for it, I want it in my showroom. In fact, there is nothing I would want to do more than sell every American a new electric vehicle… And NADA is not aware of a single study or data set out there that can substantiate the theory that EVs require less maintenance over the long term. And that’s because there just aren’t enough real-world EV miles out there to study, let alone draw any meaningful conclusions from.”

Lutz challenged the automotive press to be more skeptical and probative when reporting on these topics.

“I get it. You can’t go to an automotive or a tech conference these days without hearing about the end of personal vehicle ownership,” he said. “But I’m asking you: Question the hype, ask for proof, and find out what they’re not telling you. The future will work itself out regardless. I just want us to be informed in the meantime.”

* According to the AAA Foundation for Traffic Safety, the average driver in an urban area – the only setting in which using these services are a practical full-time transportation option – drives 10,841 miles per year. While urban drivers travel fewer miles than those living in smaller towns or rural areas, relying on ride-hailing services as a primary mode of transportation would cost $20,118 annually. This equates to more than twice the cost of owning a personal vehicle, even when factoring in the expense of fuel, insurance, parking and the vehicle itself.

“Whether you own a vehicle or not, ride-hailing services are a convenient transportation option,” said John Nielsen, managing director, Automotive Engineering and Repair. “However, with the average American city-dweller driving nearly 11,000 miles per year, a personal vehicle is still the more cost-effective choice.”