‘Bloody Hell,’ What Does Brexit do to Automakers? 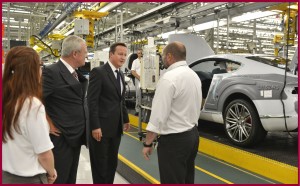 The soon to be Ex Prime Minister faces a tough challenge in July of 2013  from London Mayor Boris Johnson whose popularity for defending the fading middle class outstripped that of the elite Conservative Party. It was a forerunner of the nationalism arising today.

The United Kingdom’s European Union membership referendum voted yesterday to leave the EU, with 52% for so-called “Brexit,” for leaving the union. Nobody knows how this leave movement will play out, but it could give a new meaning to Royal Flush as one of Europe’s largest economies goes down the drain.

It could take months or years to the UK’s exit from EU membership, but the immediate effect was a sell off in the financial markets, with Central Bankers – the ones who presided over the Great Recession – making unconvincing statements that it will work itself out. Recession in the UK is likely unavoidable, with dire, cascading negative effects on other EU economies. For Americans, with Pound Sterling looking like an ounce, it’s a good time to jet across the Atlantic and have a pint.

Besides hitting automakers hard, elite establishments while ignoring the middle class while rewarding the super-rich are once again major themes in American and European politics. Ethnic nationalism, ala Chancellor Trump, is on the rise. The precedent for European stability, given the history of the causes of WW1 and WW2, is extremely disturbing. Dislocated workers sent fascist governments into power. You know the devastating social and economic results from the wars that ensued.

For automakers this unexpected turn of the political lathe has many aspects – all of them cuttingly bad. Consumer sentiment plays a large part in all auto sales. Respected forecaster LMC Automotive, relied on by many automakers and suppliers, predicted the opposite outcome to the EU out vote.

There is a technical process – the so-called Article 50 of the Lisbon Treaty of the EU – if it is invoked – that triggers the legal way to leave the EU. It would start a two-year negotiation between the UK and the European Council (EC). So far, no politician seems eager to do so, given the disaster that is underway. However the people have spoken and the Prime (prim?) Minister David Cameron of the UK has resigned because of the vote.

The uncertainty here does not bode well for Ford Motor Company or General Motors, both with long-struggling European operations. They were ashen silent today. If the exit sentiment spreads to France or the Netherlands or wherever –  in fact, even if it doesn’t – things are complicated for all automakers. We are talking about roughly one-third of the global vehicle market that could be recession bound.

LMC Automotive, in conjunction with Oxford Economics, points out that almost half of all automotive components used in UK-built new cars are imported from the EU. The UK uses an EU supply base for capital goods, finished components and skilled labor. Their conclusion is that the UK auto-industry is effectively “foreign owned.” This means “risks of investment blight and long-run atrophy of UK automotive capacity.”

For consumers, the UK imports almost 90% of its new light vehicles, of which 80% are from the EU, if you exclude UK production. The depreciation of sterling will most assuredly lead to higher prices of imported vehicles, not good for automakers.

Ken Zino is an auto industry veteran with global experience in print, broadcast and electronic media. He has auto testing, marketing, public relations and communications expertise garnered while working in Asia, Europe and the U.S.
View all posts by Ken Zino →
This entry was posted in economy, news analysis and tagged autoinformed, autoinformed.com, Brexit, Ken Zino. Bookmark the permalink.

6 Responses to ‘Bloody Hell,’ What Does Brexit do to Automakers?