BMW Delivers First All-Electric Active E in the US 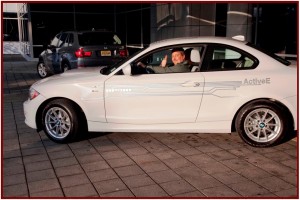 BMW has delivered the first all-electric car, dubbed Active E, in the U.S. as part of a two-year lease experiment leading to the introduction of the series production BMW i3, which will come to market in 2013. A two-year Active E lease will be $499 a month with a $2,250 down payment. BMW recently cancelled the sale of its $90,000 X6 active hybrid in the U.S. due to lack of customer interest.

The fully electric Active E with its lithium-ion batteries have a claimed a driving range of up to 100 miles on a full charge. With an output of 170 horsepower, maximum torque of 184 lb-ft from a standstill, BMW said Active E accelerates from 0–60 mph in under nine seconds. If the driver is a lead-foot – or is that now lithium foot? and/or the weather is cold – the Bimmer won’t go that far, of course. All such mileage claims await independent verification.

Earlier this year The University of California, Davis and BMW released a study of electric vehicle (EV) users who drove the fully electric Mini E car more than 1 million miles in California, New York and New Jersey starting in June 2009.

One of the published observations about the 80 to 100 mile range – that it’s acceptable – challenges conventional wisdom. This will now be tested further as the all-electric BMW Active E  deliveries, totaling 700, proceed in the metropolitan markets of Los Angeles, San Diego, San Francisco, Sacramento, New York, Boston and Hartford.

By using online and telephone surveys of the participating households, which were affluent enough to handle the $850 a month lease plus tax. Diaries, and in-person interviews of more than 40 households, were also used by the U.C. Davis team examined behavior, infrastructure use, costs, environmental benefits, and other aspects of electric driving.

Among the findings of the study are:

This of course remains a huge problem in the U.S. where half of the electricity generated comes from burning dirty coal, which gives partial truth to the quip that electric vehicles aren’t zero emission vehicles but rather elsewhere emissions vehicles, as the CO2 produced comes from a utility smokestack, not the car while its running.