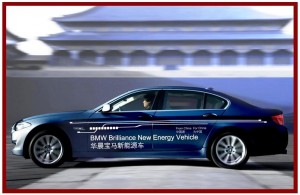 A 5-series parallel hybrid shown at Shanghai has a 160 kW engine with two turbochargers, and an electric motor with an output of 70 kW.

The BMW Group in Munich said that it will expand manufacturing capacity in China by more than €400 million in conjunction with its Chinese Joint venture partner.

Norbert Reithofer, BMW chairman, said this was in addition to the previously announced €560 million investment to expand a manufacturing plant in Shenyang with joint Brilliance.

The additional investment, which will be shared between the two partners, will be used to build a press shop, a paint shop and to expand infrastructure at the new plant in Tiexi in the Shenyang region in preparation for higher production capacity.

The BMW Group has been producing BMW 3 Series and 5 Series models in Shenyang with Brilliance since 2003. China has since become the BMW Group’s third-largest market worldwide. The company sold 167,116 vehicles in China during the past financial year – an increase of 84%. In the first four months of 2011, deliveries in China rose by 70.1% to 79,306 automobiles.

BMW Group announced that it would build a second production plant in China in November 2009. The BMW X1 is slated to be produced at the new plant in 2012. This will add more than 4,000 new jobs over the coming years, in addition to the 5,000 jobs so far created in Shenyang.

The program is the latest indicator of the success of Chinese government dictated industrial policy, which requires joint ventures to sell in the world’s largest auto market and insists on local engineering and development programs. (BMW Brilliance Automotive to Show Plug-in Hybrid at Shanghai; BMW Says Record Sales and Earnings Coming in 2011)