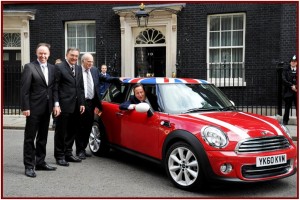 During 2010 Mini was the third-largest vehicle manufacturer in the UK at 216,302 cars or 17% of national auto production.

The BMW Group has announced that it will spend  an additional £500 million – $811 million – on its United Kingdom production sites during the next three years for its next generation MINI models. BMW said the company’s investment across all its UK operations will increase to more than £1.5 billion.

“The Mini brand has made a significant contribution to BMW Group’s success in markets around the world and we anticipate that this will grow further in the future,” said Norbert Reithofer, Chairman of the Board of Management of BMW AG.

The UK is the BMW Group’s fourth-largest single market in the world for sales, behind Germany, the U.S. and China, with sales in 2010 of  154,750. BMW, Mini and Rolls-Royce vehicles.

Most of the money  will be will be used for new production facilities and equipment at the existing Mini Plant in Oxford, a stamping plant in Swindon and an engine plant at Hams Hall. More than 5,000 jobs will be maintained.

The BMW Group has been producing the Mini in the UK since 2001. In that time nearly two million vehicles have been built and more 1.5 million have been exported to customers in 90 different countries. During 2010 Mini was the third-largest vehicle manufacturer in the UK at 216,302 cars or 17% of national auto production.

Prime Minister David Cameron said: “It’s a tremendous vote of confidence in the skills and capabilities of the company’s British workforce and in the future of UK manufacturing.”