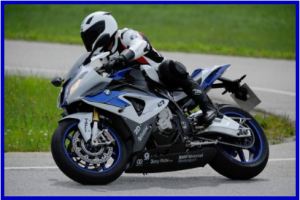 Expanding the motorcycle’s operating envelope, but not the Newtonian described physical limits.

BMW Motorcycle, aka Motorrad, is now selling the world’s first cornering ABS – ABS Pro – that can be retrofitted to the HP4, its most expensive super sports model. For €380 in Germany an experienced rider – and you better be on this class of bike – can now have ABS-controlled braking when cornering.

Claimed benefits of ABS Pro to the rider are a sensitive response and a high level of brake and ride stability together with the best possible deceleration on turns.

ABS Pro is offered as an option that can be acquired through BMW Motorrad dealerships and is initially reserved for the top super sports model in the BMW Motorrad product range, the HP4.

Calibration for the cornering ABS, BMW says, was deliberately conceived for use on public roads, where unexpected dangers lurk. ABS Pro now prevents the wheels from locking during cornering even when the brakes are applied quickly. This reduces sudden changes in steering force on shock-braking maneuvers and stops the motorcycle from rearing up unintentionally.

The ABS control is adapted to the motorcycle’s banking angle. To calculate the bike’s banking angle, the system draws on the signals for roll rate, yaw rate and transverse acceleration as provided by the sensor cluster – already used for traction control and for the suspension’s variable damping control.

As the banking angle increases, the brake pressure gradient is limited more and more at the start of the braking. This means that the pressure build-up is slower and the brake less effective. In addition, pressure modulation within the ABS control range is claimed to be more even.

The influence exerted by this slick ABS control system depends on the riding mode configured. ABS Pro is available fully in the modes “Rain” and “Sport.” During the pre-ride check, the display “ABS Pro” in the instrument panel in conjunction with the modes “Rain” and “Sport” indicates to the rider that the ABS Pro function is available. By contrast, the “Race” and “Slick” modes for aggressive, experienced riders do not support the ABS Pro function since it is deliberately designed to be used on roads.