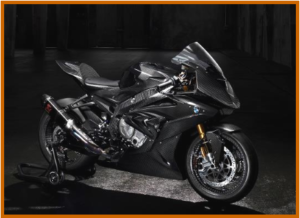 At this year’s EICMA trade show in Milan, BMW Motorrad showed a peak at what it is calling “the most exclusive model in its history,” the BMW HP4 RACE.  The prototype had a carbon fiber main frame and carbon fiber rims. It is expected to go into production during the second half of 2017.

No further details were provided. The only information from Stephan Schaller, President BMW Motorrad, related to the frame and wheels: “The HP4 RACE will feature the full carbon fiber main frame and carbon fiber rims as shown here. We will reveal more about this model next spring.”

Well, it is also certain that the BMW HP4 RACE will be manufactured by hand in a limited series. In 2015, the BMW Group sold nearly 137,000 motorcycles worldwide.

Ken Zino is an auto industry veteran with global experience in print, broadcast and electronic media. He has auto testing, marketing, public relations and communications expertise garnered while working in Asia, Europe and the U.S.
View all posts by Ken Zino →
This entry was posted in concept, motorcycles and tagged autoinformed, autoinformed.com, BMW HP4 RACE, Ken Zino. Bookmark the permalink.