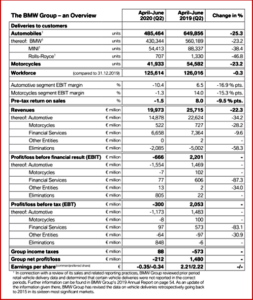 In Europe and the Americas, BMW second-quarter deliveries were significantly lower. A good performance by the BMW Brilliance Automotive Ltd. joint venture in China contributed to an improved financial result. In China, BMW delivered more vehicles to customers in the second quarter than in the same period last year – with growth of almost 17%.

“At this point, we are cautiously optimistic about the second half of the year. The new BMW 2 Series Gran Coupé, 4 Series Coupé, the 5 Series, the 6 Series Gran Turismo and the iX3, along with plug-in hybrids like the X2, 3 Series Touring, and 5 Series will all create fresh momentum,” claimed Oliver Zipse, Chairman of the Board of Management of BMW AG.

Ken Zino is an auto industry veteran with global experience in print, broadcast and electronic media. He has auto testing, marketing, public relations and communications expertise garnered while working in Asia, Europe and the U.S.
View all posts by Ken Zino →
This entry was posted in financial results and tagged auto industry commentary, autoinformed, autoinformed.com, BMW Group AG, Ken Zino. Bookmark the permalink.