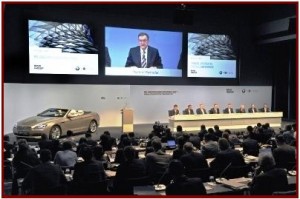 The BMW Group during 2011 will improve on record earnings set in 2010 and increase them again in 2012, claimed Norbert Reithofer, Chairman of the Board of Management of BMW AG on Tuesday in Munich.

It was the latest sign that the auto industry is coming back, especially in high margin luxury vehicle segments. The BMW prediction follows records the world’s larger luxury vehicle maker set in 2010.

Earnings before interest and taxes (EBIT) of more than 8% is expected in BMW’s automobile business; Group sales volume of well in excess of 1.5 million vehicles is targeted from the BMW, Mini and Rolls Royce brands. And Reithofer boldly predicted a margin of 8% to 10% for Automobiles for 2012.

“We believe there is also good chance of achieving our target corridor of 8% to 10% in the Automobiles segment beyond the year 2012,” said Reithofer.

The BMW Group’s workforce decreased slightly over the past year as a result of a combination of natural attrition, pre-retirement part-time working arrangements and voluntary employment contract termination agreements. The BMW Group workforce comprised 95,453 employees at the end of the year (2009: 96,230 employees; -0.8%) worldwide. At the beginning of the new training year, a total of 1,124 young people were gives apprenticeships with the BMW Group.
(See BMW on Record 2010 Earnings Proposes Record Dividends)