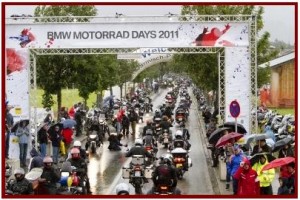 In addition to Bavarian food specialties, over 12,000 liters of alcohol-free drinks and over 27,000 liters of beer were consumed this year.

BMW introduced its latest liquid-cooled electric motorcycle – dubbed E-Scooter – at its 11th Motorrad Days in Garmish this past weekend. The E-Scooter is said to use motorcycle technology that could make it suitable for a wider range of commuting than current inner-city scooters provide for short trips.

BMW had two main requirements for E-Scooter’s development: handling and acceleration comparable to those of a maxi scooter with a combustion engine; and a large range during realistic conditions of use, which includes carrying two people.

This development concept has the necessary electric motor output to achieve acceleration figures in the 0 – 60 km/h range, where it’s claimed they are at the level of a current maxi scooter powered by a 600 cc gasoline engine. 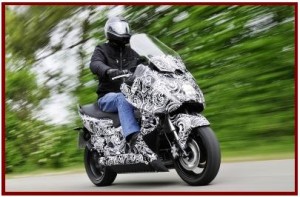 This could be one electric vehicle that makes some sort of sense.

When the battery is completely flat, the charging is said to be less than three hours. However, BMW said experience has shown that the battery rarely runs out completely, so charging times are generally shorter. 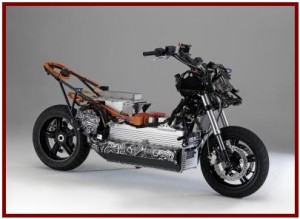 The aluminum battery case is the frame - it's liquid cooled during riding and charging.

Unlike existing gasoline scooters, the BMW concept does not have a main frame. Instead, the aluminum battery casing — which also contains the electronics required for battery cell monitoring — is  the frame. The steering head support is connected to it, as is the rear frame, which contains a single swing arm with directly hinged, horizontally installed shock absorber.

The electric motor is mounted behind the battery casing, not at the wheel. The secondary drive is a toothed belt from the motor to a belt pulley mounted on the swinging fork pivot. From here, power transmission occurs via a roller chain to the rear wheel.

When the E-Scooter is decelerated in trailing throttle or when braking, the energy released is regenerated, increasing the vehicle’s range by between 10% and 20% depending on driving conditions.

The electrical components required for the electric drive are installed on the top of the battery casing. The external battery electronics system permanently collects and monitors data such as the temperature and voltage of battery cells, both during travel and while charging.

The charging system includes a cable which allows the battery to be recharged at a conventional household power socket. In addition to the other components such as an ISO insulation monitor, high-voltage indicator and a high-voltage distributor, a DC-DC converter is included. It is required to change high voltage to low voltage power to supply the 12 volt vehicle supply and for the control units.

During operation, the electric motor and power electronics are liquid-cooled, as is the charging device during charging. An electric coolant pump ensures coolant circulation through the radiator. While a coolant is commonly used for the battery in electrically powered cars, the E-Scooter concept vehicle uses an air cooling system in order to save space.