The Boeing Company has a “deferred prosecution agreement” with the Department of Justice to resolve a criminal charge related to a conspiracy to defraud the Federal Aviation Administration’s Aircraft Evaluation Group (FAA AEG) in connection with the FAA AEG’s evaluation of Boeing’s 737 MAX airplane. The deal was announced yesterday as the U.S. Capital was under siege by Trump supporters or treasoners who were sent there by Trump and the Republican party to overturn the election that Trump lost. 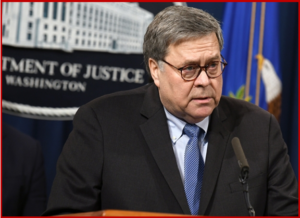 William Barr when he headed his injustice department under Trump.

The Justice Departments reputation and adherence to the law is subject to considerable debate under the pardoner in Chief – soon to be ex-president Trump and the former Attorney General (resume laundering by resigning 23 Dec 2020) and Republican lawyer William P. Barr. He is also known here as no-holds Barr for his relentless interference in Justice Department principles and law enforcement procedures to protect Trump, aka the Man Who would be King. Boeing, debatably, profited from such interference when the Trump Administration refused to ground the 737 Max despite growing incidents and fatalities. It’s a reasonable bet that Boeing  and Barr wanted to cut its ties with Trump after he lost the presidential election last November.

Boeing will pay a total criminal fine of more than $2.5 billion, made of a criminal monetary penalty of $243.6 million, compensation payments to Boeing’s 737 MAX airline customers of $1.77 billion, and the establishment of a $500 million crash-victim beneficiaries fund to compensate the heirs, relatives, and legal beneficiaries of the 346 passengers who died in the Boeing 737 MAX crashes of Lion Air Flight 610 and Ethiopian Airlines Flight 302. The Chicago field offices of the FBI and the DOT-OIG investigated the case, with the assistance of other FBI and DOT-OIG field offices.

“Boeing’s employees chose the path of profit over candor by concealing material information from the FAA concerning the operation of its 737 Max airplane and engaging in an effort to cover up their deception. This resolution holds Boeing accountable for its employees’ criminal misconduct, addresses the financial impact to Boeing’s airline customers, and hopefully provides some measure of compensation to the crash-victims’ families and beneficiaries,” claimed Acting Assistant Attorney General David P. Burns of the Justice Department’s Criminal Division.

The Deadly 737 Max History as Boeing  Admits in Court  Filings

Boeing, through two of its 737 MAX Flight Technical Pilots, deceived the FAA AEG about an important aircraft part called the Maneuvering Characteristics Augmentation System (MCAS) that impacted the flight control system of the Boeing 737 MAX. Because of their deception, a key document published by the FAA Aircraft Evaluation Group lacked information about MCAS, and in turn, airplane manuals and pilot-training materials for U.S.-based airlines lacked information about MCAS.

Boeing began developing and marketing the 737 MAX in or around June 2011. Before any U.S.-based airline could operate the new 737 MAX, U.S. regulations required the FAA to evaluate and approve the airplane for commercial use. In connection with this process, the FAA Aircraft Evaluation Group was principally responsible for determining the minimum level of pilot training required for a pilot to fly the 737 MAX for a U.S.-based airline, based on the nature and extent of the differences between the 737 MAX and the prior version of Boeing’s 737 airplane, the 737 Next Generation (NG).

At the conclusion of this evaluation, the FAA Aircraft Evaluation Group published the 737 MAX Flight Standardization Board Report (FSB Report), which contained relevant information about certain aircraft parts and systems that Boeing was required to incorporate into airplane manuals and pilot-training materials for all U.S.-based airlines. The 737 MAX FSB Report also contained the FAA AEG’s differences-training determination. After the 737 MAX FSB Report was published, Boeing’s airline customers were permitted to fly the 737 MAX.

On Oct. 29, 2018, Lion Air Flight 610, a Boeing 737 MAX, crashed shortly after takeoff into the Java Sea near Indonesia. All 189 passengers and crew on board died. Following the Lion Air crash, the FAA AEG learned that MCAS activated during the flight and may have played a role in the crash. The FAA AEG also learned for the first time about the change to Maneuvering Characteristics Augmentation System, including the information about MCAS that Boeing concealed from the FAA AEG. Meanwhile, while investigations into the Lion Air crash continued, the two 737 MAX Flight Technical Pilots continued misleading other, including at Boeing and the FAA, about their prior knowledge of the change to MCAS.

On March 10, 2019, Ethiopian Airlines Flight 302, a Boeing 737 MAX, crashed shortly after takeoff near Ejere, Ethiopia. All 157 passengers and crew on board died. Following the Ethiopian Airlines crash, the FAA AEG learned that MCAS activated during the flight and may have played a role in the crash. On March 13, 2019, the 737 MAX was officially grounded in the U.S., indefinitely halting further flights of this airplane by any U.S.-based airline.