Book Review: Car Spy – an Inside Look at an Auto Culture Past 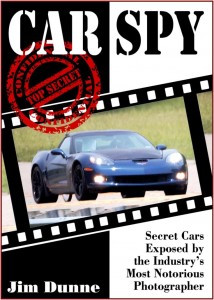 Car Spy is an entertaining romp through a rich automotive past.

Once upon a time the Detroit Three automakers were really the “Big Three” with potentially huge profits all hinged around the successful hyping and subsequent sales prompted by annual new model introductions.

Along the way a new car spy photo business was created, which tried to reveal ahead of time the secrets due that fall when dealerships held gala debuts of Detroit’s latest offerings. This was the business that car spy Jim Dunne shaped and profited from.

Great fortunes were made and lost by marketing small or big changes to move the metal – particularly after the mid 1950s when post war auto production finally eclipsed pent up demand. Huge efforts were made by automakers to keep “bold new grilles” or tailfins or V8 engines and automatic transmissions secret – as part of a whole “longer, lower, wider” advertising cliche’ dominated culture. This marketing method dominated the automotive business with its distinct selling seasons for decades. Veteran automotive journalist Dunne was there, and not only recorded but shaped its history.

In his new book Car Spy, the sometimes irascible, always hard working Dunne presents the photographic equivalent of an anecdotal talk about decades of Detroit’s triumphs, excesses and disasters. Car Spy is illustrated with more than 200 vintage black and white and color images of domestic and offshore brand cars in various stages of development and testing. Dunne also takes a flinty eye look at the current automotive scene – a must read for aspiring auto writers and p.r. people, and anyone else in the car business.

Car Spy is entertaining, funny, and sardonic. It captures the voice of Dunne – caveat here – whose adventures I sometimes participated in, whose photos I ran in various publications and still run in AutoInformed.com, and whose stories related in Car Spy I heard first hand. 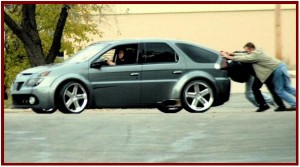 At the time this was sent out, Dunne suggested to editors a caption that said GM's struggles were reflected in the new Pontiac Aztec...

Car Spy is a look at what is a rapidly fading automotive past. I highly recommend it to anyone even remotely interested in the automobile business. Auto manufactures now have largely co-opted the car spy business with their orchestrated reveals of new model names, sketches, concept versions, partial photos, background briefings, Facebook postings, and then – finally – the public intro of the production version of the car.

The upshot? The car spy photo business is, sadly, diminished and fading away. The collapse of automotive fan magazines, as well as newspapers, along with the blatant theft of creative work on the internet has made Car Spy a valuable reminder of an automotive industry that created jobs and wealth for millions upon millions of workers and their families before the great American Dream turned into the current deficit ridden and politically bankrupt nightmare.

Dunne says his favorite image in Car Spy is on the cover.

“What else gets the adrenalin pumping faster than seeing a future Corvette, modestly disguised, going through its early testing,” he told AutoInformed.

“The foreshortened image results from a 500 mm long range lens. The fifth wheel says ‘I’m testing.’ The pitot valve on the roof (no antenna, this) confirms. A slight tilt shows the car is entering a highly banked, high-speed turn. Going the wrong way (check the guard rails) imparts a private test road. All four tires show clearly, with the rears made even larger by the camera lens. Black covering on the hood says this car is a prototype, not ready for public view. Computer (cover on the passenger side windshield) is keeping track of the speed, fuel economy, braking distance, temperatures, engine revs… Photo not sharp? That long range lens picks up a lot of atmosphere in its distance from the car,” Dunne said.

He also says, master craftsman that he remains, the image could be better.

“I have a big disappointment in this particular (cover) presentation. The car appears as running on a level surface. That’s not a true image. Actually if you tilt the photo as you would in examining a strip of 35 mm film, you’ll see what’s captured on the original shot – the car slightly canted, but under control, as it heads into the high speed banking. More feeling of speed and action that way.”

2 Responses to Book Review: Car Spy – an Inside Look at an Auto Culture Past