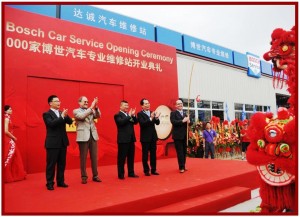 Bosch has been a major presence in China for many years now: The very first Bosch service shop based in China was opened in Shanghai in 1926. Since then, the workshop network in China has been extended consistently, as it has globally.

The first Chinese Car Service center, which replaced Bosch Services, began operations in 1998. By 2007, 500 workshops were adopted to the Bosch workshop concept due to the growing number of vehicle owners in China. During the last four years the number of Bosch Car Service centers in China doubling to 1000 in the world’s largest car market.

The Dacheng center offers 5000 square meters of workshop space with 25 workstations for service, repair and bodywork. There are more than 20 workstations for vehicle servicing. The center is equipped with the latest workshop technology from Bosch, such as the FSA 740 diagnostic unit, the KTS 570 test system and the BML 2415 battery tester. Some 120 associates complete service and repair work on all vehicle brands.

In a release Bosch said it now has the world’s largest independent workshop network of 15,000 shops, 90 years after the first one opened in Hamburg. The range of services includes traditional Bosch fields of automotive electrics, electronics and diesel servicing, as well as general mechanical vehicle repairs, oil changes, air-conditioning service, in-car multimedia, tires and auto glass service. Every day, more than 82,000 associates complete service and repair work on more than 180,000 vehicles.