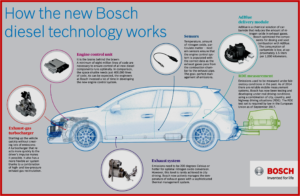 Since 2017, European legislation has required that new passenger car models tested according to an *RDE-compliant mix of urban, extra-urban, and freeway cycles emit no more than 168 milligrams of NOx per kilometer. As of 2020, this limit decreases to 120 milligrams to limit the negative effects of cancer-causing diesel exhaust emissions.

How this came about was brought to international attention by what appeared previously to be  significant reductions in the legislated light-duty diesel vehicle Nitrous Oxide emissions under the European Euro 1 through 5 regulations. Independent testers and researchers produced data that show real-world NOx emissions have not been reduced nearly as significantly as companies claimed.

The Volkswagen dieselgate scandal exposed clearly fraudulent conduct. VW, one of the world’s largest automotive groups, deliberately lied about diesel emissions and cheated during testing by using control software that resulted in dirtier diesel exhaust that was far dirtier in real driving than in the lab on a dynamometer.

There might be a way to recover the reputation of diesel cars. Vehicles equipped with Bosch diesel technology can achieve as little as 13 milligrams of NOx in standard legally-compliant RDE cycles, or so the giant auto supplier claims. That is approximately one-tenth of the prescribed limit that will apply after 2020.

With the EU countries banning diesels in some cities, Bosch test vehicles are now belching exhaust as low as 40 milligrams per kilometer. In fact diesel penetration has been declining in Europe since 2011 in spite of subsidies on fuel. Bosch claims a  combination of advanced fuel-injection technology, a newly developed air management system, and intelligent temperature management has made such low readings possible. The measures to reduce NOx emissions do not significantly impact fuel consumption, so the diesel retains its comparative advantage in terms of fuel economy and greenhouse gas CO2 emissions. The questions are  will customers and regulators  once again view diesels as environmentally friendly or is it too little too  late? Time and sales penetration numbers will tell.

“Diesel will remain an option in urban traffic, whether drivers are tradespeople or commuters,” Bosch CEO Dr. Volkmar Denner claimed at its annual press conference last week. Leaving aside the fact that diesel is a major component of his *largest business sector and Bosch has invested untold (billions?) amounts of capital into the business – if true, NOx emissions can now remain below the legally permitted level in all driving situations, regardless of whether the vehicle is driven dynamically or slowly, in freezing conditions or in summer temperatures, on the freeway or in congested city traffic.

“We firmly believe that the diesel engine will continue to play an important role in the options for future mobility. Until electro-mobility breaks through to the mass market, we will still need these highly efficient combustion engines,” Denner said. His ambitious target for Bosch engineers is the development of a new generation of diesel and gasoline engines that produce no significant particulate or NOx emissions. Even at Stuttgart’s Neckartor, a notorious pollution black spot, he wants future combustion engines to be responsible for no more than one microgram of NOx per cubic meter of ambient air – the equivalent of one-fortieth, or 2.5 percent, of today’s limit of 40 micrograms per cubic meter.

A new emission standard introduced when it was discovered that which is obvious – auto companies test to the test cycle to achieve maximum marketing numbers, not to show what customers actual derive. Such is also  at the heart of long-standing complaints about the U.S. EPA test standard for fuel economy , which has been adjusted multiple times to bring real-world results closer to test results after consumers complained.

Mobility Solutions is the largest Bosch Group business sector. According to preliminary figures, its 2017 sales came to 47.4 billion euros, or 61% of total group sales. This makes the Bosch Group one of the leading automotive suppliers. The Mobility Solutions business combines the group’s knowledge  in the areas of automation, electrification, and connectivity. The business sector’s main areas of activity are injection technology and powertrain peripherals for internal-combustion engines, “solutions for powertrain electrification, vehicle safety systems, driver-assistance and automated functions, technology for user-friendly infotainment as well as vehicle-to-vehicle and vehicle-to-infrastructure communication, repair-shop concepts, and technology and services for the automotive aftermarket.” AutoInformed.com acknowledges that Bosch developed important automotive innovations, such as electronic engine management, the ESP anti-skid system, common-rail diesel technology. The company stated by producing magnetos for auto ignition systems, a component of which – the armature – is stylized in its logo.