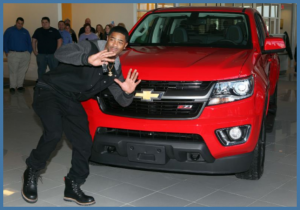 “It is just another unreal event in what has been an incredible week,” said Butler.

It sure has been an interesting year for the NFL. The latest twist involves Super Bowl MVP Tom Brady, aka underinflated balls, refusing to accept a Chevrolet Colorado pickup for his performance in XLIX. Instead, the Colorado will go to cornerback Malcolm Butler whose end zone interception almost certainly resulted in a Patriots’ victory.

“I’ve seen several game-changing moments in big games, and Malcom’s interception last Sunday ranks up there as one of the biggest,” said Brady. “I appreciate Chevrolet wanting to honor the Super Bowl’s top performer, and I’m glad they have agreed to award the Colorado to Malcolm.”

AutoInformed is not sure what to think about this, given the NFL’s record on truth telling, prevarication and coverups. Brady being a class guy? Chevy getting a double bite of the P.R. apple for GM and the Patriots?  Brady doesn’t want or need the truck, or want to pay taxes on it?

Ken Zino is an auto industry veteran with global experience in print, broadcast and electronic media. He has auto testing, marketing, public relations and communications expertise garnered while working in Asia, Europe and the U.S.
View all posts by Ken Zino →
This entry was posted in people and tagged autoinformed, autoinformed.com, Ken Zino. Bookmark the permalink.