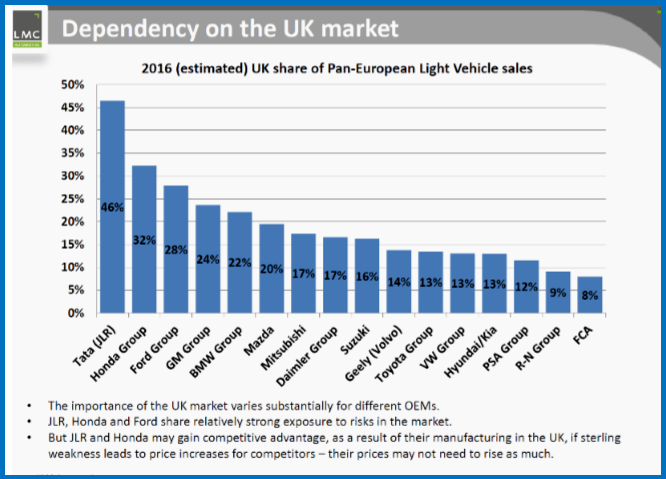 The importance of the UK market varies substantially for different automakers, according to the latest report from LMC Automotive and Oxford Economics. Volume loss, compared to a pre-Brexit forecast, rises to more than 400,000 units by 2018. Since imports are ~ 90% of sales, most of the lost volume comes from outside the UK. The decrease in lower UK sales will therefore hurt non-UK European production.

To state the obvious, new investment in the UK – expansion of current manufacturing or new capacity – for manufacturers with viable alternatives in the EU appears unlikely until the current uncertainty diminishes. This economic chaos could last for years.

JLR, Honda and Ford have “strong exposure to risks,” says LMC. However, JLR and Honda may get a competitive advantage because of their manufacturing presence in the UK. This makes sense only if Sterling weakness leads to higher price increases by competitors. JLR and Honda may not need to rise as much. Honda also has a Japanese sourcing option.

General Motors presents a more complicated situation. It has strong, but hardly profitable operations in the UK. The compact Vauxhall/Opel Astra is due for a full-model change in 2021. GM could move production to Germany and/or Poland – both countries already well established to stay in the Euro-zone.

Mid-model-cycle production location switching appears unlikely, according to LMC, because of the high costs of double investment in logistics and tooling that would accompany such a change. It is more likely, any change would be made when a vehicle is due to be replaced with a new generation, or a new model line launched.

OEMs Manufacturing in the UK Will Consider

Ken Zino is an auto industry veteran with global experience in print, broadcast and electronic media. He has auto testing, marketing, public relations and communications expertise garnered while working in Asia, Europe and the U.S.
View all posts by Ken Zino →
This entry was posted in economy, news analysis and tagged autoinformed, autoinformed.com, Brexit, Ken Zino. Bookmark the permalink.