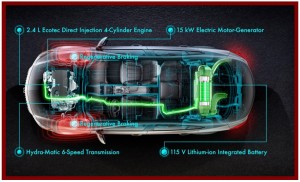 Buick’s E-Assist uses a small lithium-ion battery pack and an electric motor to add to the fuel-efficiency of a 2.4-liter gasoline engine.

Starting with 2013 models this fall, E-Assist will be standard on the mid-size Buick Regal with the discontinuation of the 2.4-liter base model. It is the second mild-hybrid to join the Buick lineup as standard equipment following the full size LaCrosse in 2012. It was previously a $2,000 Regal option; and an easy add since both cars use the same powertrain.

This also  seems a safer marketing move than the upcoming Korean built Encore SUV, clearly designed with fuel economy in mind.  This results in a 168- inch long Buick,  ~10 inches shorter than the new Honda CRV.

Both are the latest Buick moves in the ongoing fuel economy ratings wars that are seeing most automakers vie for advertising and CAFE compliance benefits as fuel prices stay close to record highs. Whether owners will actually see the numbers at the pump  – and they haven’t in the past, leading to tweaking of EPA ratings downward – could set off more customer dissatisfaction.

Buick’s E-Assist uses a small  lithium-ion battery pack and an electric motor to add to the fuel-efficiency of a  2.4-liter gasoline engine. The system provides an electric boost to aid the engine at low speeds and on inclines. This is an evolved version of the mild hybrid used with notable lack of acclaim at the now defunct Saturn division a few years back with an expensive lithium battery added.

The Regal with E-Assist achieves an EPA-estimated 36 highway mpg, a 5 mpg improvement over the discontinued 2.4 base car. Both the much thirstier Regal Turbo, at 27 mpg highway, and Regal GS models – 31 mpg highway, will also remain available.

Already Honda and Hyundai are being sued by pressure groups over the high economy numbers used in advertising. The ever rapacious class-action law firms looking for millions in fees can’t be far behind if they can figure out a way to get a class certified and actually prove some harm has been done.

The fact remains that EPA sticker ratings have been adjusted several times since their inception because of justifiable customer complaints that they often overstate real world results. Buyer beware – and be sure before you buy that you drive a model that is touted as one returning high fuel economy – some the tricks that automakers use, such as removing sound proofing, changing gear ratios, and underpowered engines, among others, can make for decidedly lackluster performance.