Posted on 5 January 2011 by Kenneth Zino 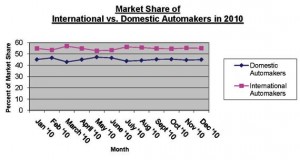 At the end of the 2010 calender year offshore brands retained their majority hold on the U.S. market.

As the U.S. automobile market recovered somewhat in 2010 and increased truck sales particularly helped Ford, General Motors and Chrysler record above average sale gains compared to the industry, there was speculation that “Buy American” was a factor.

Now that the final numbers are in for all automakers, an answer is available – no. Offshore brands enjoyed an equally good year in 2010 as the Detroit Three, according to light vehicle retail sales numbers from AutoData.

Offshore brands continued to own a majority of the U.S. auto market for every month of 2010, averaging 54.8% – down slightly from 55.8% in 2009.  And the decrease can be accounted for by the sales of giant Toyota, which were flat.