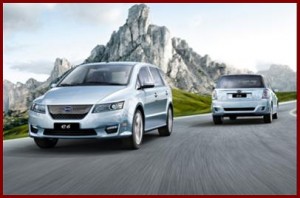 BYD shares have been declining all year now about -40%. It also trades on the Hong Kong exchange where shares are down ~80%. Berkshire Hathaway owns 10% of the company, hoping to make money on the Chinese EV market.

An investigation by the Shenzhen government into an accident and fire between a BYD e6 electric vehicle and a Nissan sports car that killed three people in May concludes that the battery pack was not at fault, according to a BYD filing with the Shenzhen stock exchange.

A Nissan GT-R traveling at 242km/h – 150 mph – hit a BYD e6 taxi traveling in the same direction at 81km/h. The first impact sent the cab careening out of control, which then resulted in a second impact in to a roadside tree, whereupon the e6 completely burned. The cab driver and two passengers perished.

The rear end of the EV  and the battery compartment were severely deformed, and the power battery pack and high voltage switchbox were compressed, causing damage to part of the power batteries and a short-circuit, according to the report by the Shenzhen Academy of Metrology and Quality Inspection. High voltage lines of the high voltage distribution box and the body of the car short-circuited, producing electric arcs which ignited the interior materials of the vehicle and part of the power batteries, which are a variation of  the latest lithium ion technology.

BYD, owned 10% by Berkshire Hathaway, shares have been declining all year (-40%)  also trades on the Hong Kong stock exchange where the shares are down about 80%. BYD said in April that its first half net profit will fall by 75% to 95%  as growth in the Chinese economy slows. The accident and grizzly pictures widely circulated in China put additional pressure on the stock price.