Cabrera Rides in Corvette at NAIAS after Disastrous 2018 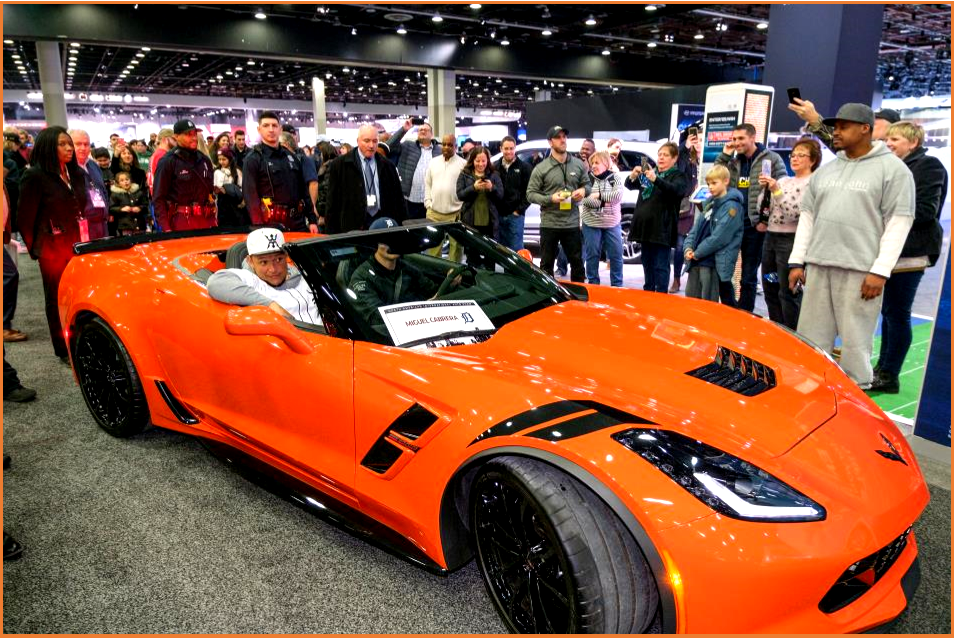 The Tigers Caravan stopped by NAIAS so players could meet with fans. Is Cabrera looking rearward for a process server who needs a signature?

Detroit Tigers’ first baseman Miguel Cabrera rides in a Corvette Grand Sport on Friday 25 January 2019 on his way to the stage in the Chevrolet exhibit during the North American International Auto Show at Cobo Center in Detroit, Michigan. The Tigers finished 2018 playing under .400 ball with 98 losses, 33 games back from earning a Wild Card slot in the American League East.

“I want to be dangerous,” Cabrera said during a pre-season press conference. Cabrera has been ensnared in a messy and very expensive legal, child support and property rhubarb between his wife and mistress, both of whom have children by him.

Cabrera took four batting titles in five years, including a Triple Crown in 2012. He whooshed to a batting-title contention in 2016, averaging .316 with 38 home runs, 108 RBIs and a .956 OPS. He might play out his career as a designated hitter in the American League.

Lately, personal problems and a lineup of injuries – back, groin, biceps, a hamstring – have made him a has been with weak plate appearances when he is playing ball if he’s on the field at all.

He batted .249 with a .728 OPS in 2017 as the Tigers were turning into kittens. Last year, Cabrera hit .299 and 22 RBIs with only 3 homers and an .843 OPS. Then his left arm tendon shattered. Virtually all his season’s work came during the opening month. Next, a right hamstring strain propelled him to the disabled list as the Tigers who did lace on their spikes reverted to minor league ball n the filed if shattered dreams.

The Tigers Caravan stopped by so players could meet with fans, answer questions and sign a few autographs. Chevrolet is the official vehicle of Major League Baseball.