Cadillac ELR to be Built at Detroit-Hamtramck 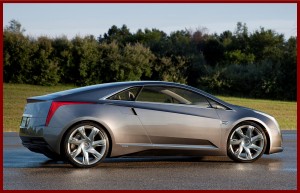 Switched on again, the Cadillac ELR hybrid is based on the Chevy Volt and will be built alongside it.

Development of the Chevrolet Volt-based Cadillac ELR is now underway, and GM has just confirmed that the ELR will be built at the GM’s Detroit-Hamtramck plant. The off again/on again program is based on the Converj concept first shown at the 2009 North American International Auto Show as General Motors was hurtling toward a bankruptcy reorganization. Converj, err ELR, will be GM’s second hybrid after the Chevrolet Volt/ Holden Volt/ Opel Ampera when it appears late in 2013 as a 2014 model. (Cadillac Rejoins Electric Vehicle Parade with Converj Concept)

“The ELR will be in a class by itself, further proof of our commitment to electric vehicles and advanced technology,” said General Motors North America President Mark Reuss during a speech at the SAE Convergence Conference in Detroit. GM said it represented an additional $35 million investment in the sprawling assembly complex that last built a two-door coupe as the 1999 Cadillac Eldorado.

Cadillac ELR will have an electric drive system made up of a T-shaped lithium ion battery, an electric drive unit, and a four-cylinder engine-generator. It uses electricity as its primary source to drive the car for short distances without using gasoline or producing tailpipe emissions, if you do not account for how the electricity used to charge the batteries is generated. When the battery’s energy is low, the ELR switches to extended-range mode – ala Volt – to enable driving for hundreds of additional miles due to the superior power density of gasoline.

Detroit-Hamtramck is the only U.S. automotive manufacturing plant that mass produces what GM calls extended-range electric vehicles, which are really hybrids with large battery packs. GM hybrids or extended-range electric vehicles – take your pick – are exported to 21 countries from the plant. In the U.S. more than 16,000 Chevrolet Volts have been sold year-to-date, with a small number exported. (A GM spokesperson refused to release actual production figures. Production of the Volt just resumed earlier this week after a 4 week shutdown to adjust inventory levels.) The lithium-ion battery will be built at GM’s Brownstown Battery Assembly plant in Michigan.