Cadillac Wins the 24 Hours of Daytona 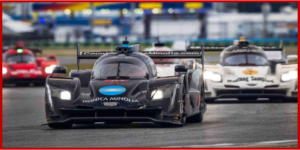 The weather was miserable, but the racing superb at the Rolex 24 at Daytona this past weekend with Cadillac – Dallara chassis and  a version of a Corvette engine – taking the checkered flag in GT3 after a night of steady rain, cold temperatures and 21 caution flags.

The #5 Cadillac DPi of team drivers Joao Barbosa and Christian Fittipaldi, helped for this long race by Filipe Albuquerque, battled hard against the #10 Konica Minolta Cadillac DPi of Ricky and Jordan Taylor, longtime co-driver Max Angelelli in his final race, and four-time NASCAR Cup Series champion Jeff Gordon, in his first Rolex 24 since his Daytona debut in 2007.

“Sometimes it rains harder and then lighter,” said Gordon, who by his NASCAR background is not used to running in precipitation. “You are trying figure the dry line and the wet line. It is a little hard to see through the windshield when it is raining,”said Gordon in a refreshingly honest admission that at this level of racing, conditions and fast driving are difficult and life threatening.

“That was tough. I am glad I brought it back in one piece. The car is 100% improvement in the rain from the last time. That last time I failed at it. I would like to do more of it. I was glad to turn it over to Ricky. The way the floor of the car is raised up it allows the rain to get away from the tires,” concluded Gordon.

With seven minutes to go, Albuquerque was leading in the #5, with Ricky Taylor on his exhaust pipe. At the end of the front straightaway, which turns into a fast left turn, Taylor took the #10 car low and inside of Albuquerque. When the #5 set up for the left turn, Taylor hit the car in the rear, spinning it out. Albuquerque recovered quickly and at the end, finished only 0.671 seconds behind the #10.

The incident was reviewed by IMSA officials who decided to take no action against Taylor. In AutoInformed’s view, it was without a shadow of a doubt an illegal, chicken-dung pass.

“I don’t race like that, to be hit in the back. He didn’t even wait for me, he just took off,” Albuquerque said. “Clearly I was hit in the back. It was not a clean move. I think everyone saw that.” 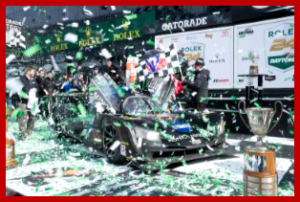 No kidding, this ain’t NASCAR, the orchestrated pro-wrestling equivalent in motorsports. It’s also an ominous sign that NASCAR, which now owns the sanctioning body IMSA, is oblivious to and or disrespectful of the history of sports car racing – well, it seems clear actually both.

Cadillac finished first and second place in its first time out. The No. 31 Whelen Engineering Cadillac DPi, led often in the first third of the race until electrical problems, a bent control arm and a flat tire dropped the car to a sixth-place finish in class, 14th overall. Third place went to the No. 90 Visit Florida Racing Multimatic/Riley LM P2 car of Marc Goossens, Renger van der Zande and Rene Rast.

“No one expected us to last for 24 hours,” Goossens said. “That just shows how strong this little team is. Right now, we have to look at the big picture.”

Fourth was the No. 2 Tequila Patron Nissan DPi, the team that won both the 2016 Rolex and Twelve Hours of Sebring. Drivers Scott Sharp, Ryan Dalziel and the star of both races last year, Pipo Derani, were three laps behind the two Cadillacs.

Other marques in this racing class include Aston Martin, Audi, Bentley, BMW, Ferrari, Lamborghini, McLaren and Porsche. The FIA is the governing body for worldwide motorsport, with the GT3 class representing a specific set of specifications for racing cars based (sort of) on production models.

Ken Zino is an auto industry veteran with global experience in print, broadcast and electronic media. He has auto testing, marketing, public relations and communications expertise garnered while working in Asia, Europe and the U.S.
View all posts by Ken Zino →
This entry was posted in racing. Bookmark the permalink.