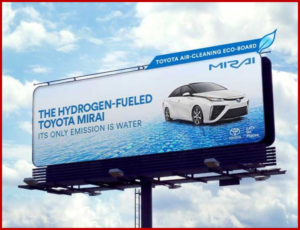 Almost 2,500 hydrogen fuel-cell vehicles were sold or leased globally in 2016, indicating a more than three-fold increase compared to 2015. California grew the fastest in sales and leases, but remained behind Japan in volume.

Despite the growth, the number of fuel cell vehicles sold and leased are minuscule compared to the market, observed Naqi Jaffery, President and CEO of Information Trends, the source of the data. However, in Jaffery’s view the growth portends well for the future of hydrogen fuel cell vehicles.

In a second report, Information Trends says close to 5,000 hydrogen fueling stations will be deployed globally by 2032

The deployment activity is particularly brisk in Asia, where Japan and Korea are strong proponents of the hydrogen economy. President nit-twit Trump of course has a new head of the EPA that denies Global Warming is real despite unequivocal and unanimous scientific evidence to the contrary. (CARB Defies Trump on Vehicle Emission Standards)

In Europe, Denmark was the first country to deploy a nationwide hydrogen fueling infrastructure, the report said, but the real charge is being led by Germany, which is establishing 400 hydrogen fueling stations in the next six years. In the U.S., the state of California is aggressively deploying hydrogen stations as part of its efforts to combat greenhouse gas emissions. (Toyota, Shell to Bid on California Hydrogen Refueling Network)