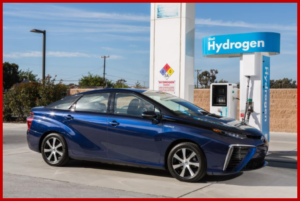 Socialism for the rich once again. Too bad the CEC doesn’t require some ownership for the capital it is providing.

Yes, that’s right big oil, which lobbied strenuously and successfully against global warming even though executives knew the companies were major contributors to the problem, is raiding the taxpayer’s bank accounts to become part of the newly emerging green age that will make fossil fuels obsolete.

Socialism for the rich once again. Too bad the CEC doesn’t require some ownership for the capital it is providing. Worse, the Trump misadministration is proposing to roll-back desperately needed methane regulations. Methane, a product of oil drilling is currently burned at the well by flaring. EPA said in the past that over 100 years, methane is estimated to have a global warming potential that is 28 to 36 times that of CO2.

According to the Santa Barbara Independent last week: “In a Federal District Court in San Francisco, five oil companies argued before a judge on facts that uphold the 95-100 percent likelihood that human activity has been the dominant cause of the global warming of Earth since the mid-20th century. In 2017, the cities of Oakland and San Francisco and the State of California filed lawsuits against Chevron, ExxonMobil, ConocoPhillips, Royal Dutch Shell, and British Petroleum (BP), the five largest investor-owned producers of fossil fuels in the world, which are considered responsible for over 11 percent of all carbon dioxide and methane pollution that has accumulated in the atmosphere since the Industrial Revolution.”

Other major contributors to global warming,  auto giants Toyota and Honda have agreed to expand Fuel Cell Electric Vehicle (FCEV) sales in California in support of these Shell Hydrogen stations. The wished-for new stations join nine Shell hydrogen locations in the state, seven of which came from  a previous CEC award in 2017.

Apologists note that this deal with the devil will see an expanded network that expedites and increases the number of hydrogen refueling stations in support of growing the market for FCEVs. Thereby significantly reducing emissions from the transport sector and providing customers with reliable access to fuel. for a “compelling value proposition.” Well the survival of the oil industry is ultimately at stake, so taxpayers should demand a hefty return for letting the oil companies live.

In 2020, Shell announced plans to be part of a consortium that aims to build the largest European green hydrogen project capable of producing 800,000 tons of green hydrogen in the Netherlands by 2040.

If given the go-ahead, NortH2 will be powered by electricity generated by an offshore wind farm in the North Sea. Green hydrogen, produced through electrolysis using renewable power such as wind and solar, is at the center for the European Green Deal. Shell also helped with the launch of The Hydrogen Council, a global coalition of companies working to raise the profile of hydrogen’s role in the transition to a lower-carbon energy system.