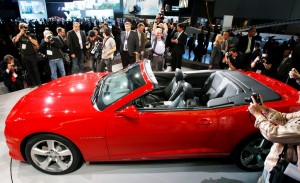 Camaro Convertible and the Buick Regal will be built alongside the sold out Chevrolet Camaro Coupe.

The unqualified success of the Camaro has forced Ford to increase incentives on the Mustang, long the best seller in the pony car class until the new Camaro appeared last year. The questions now are how many more Camaros can be sold, and what will be Ford’s response?

Buick on the other hand faces a much tougher slog with the Regal. Year-to-date Regal sales are 7,288 or an order of magnitude lower than Camaro’s 71,521. Ford Mustang is at 64,171 right now.

Production of the Camaro Convertible is slated for January, while the Buick Regal will ramp up production in early spring. In the interim, Regals will continue to be imported from Germany.

This new shift of unionized workers for Oshawa’s “Flex Line” (for flex or flexible since more than one vehicle can be built on it, long a Japanese best practice) comes within a month of the addition of a third shift on a dedicated assembly line to add increased production for the Chevrolet Equinox, one of North America’s strongest selling vehicles.

The two new shifts have secured more than 1300 jobs for Oshawa, recalling all production workers laid off during the Great Recession and GM’s bankruptcy, along with the hiring of more than 300 new employees, which is keeping with the terms of bailout funding that came from Canadian federal and provincial taxpayers.

To meet demand, GM has increased Chevy Equinox production three times. The latest increase, which took effect in September, ships Equinox bodies from the CAMI body shop in Ingersoll, Canada, to the Oshawa Assembly Plant for paint and final assembly. Annually, this adds capacity to build 60,000 to 80,000 more Equinox and GMC Terrain (also assembled at CAMI) crossovers for the Canadian and U.S. markets. Year-to-date 111,828 Equinox models and 45,314 Terrain versions have been sold.