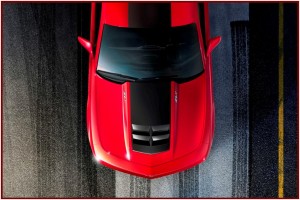 For $54,995, the ZL1 compares favorably to much more expensive cars.

The Camaro ZL1 is powered by a supercharged 6.2-liter V8 engine is SAE-rated at 580 horsepower (432 kW) and 556 lb.-ft. of torque (754 Nm). This makes it the most-powerful production Camaro ever. As a result, this Camaro pony car is capable of speeds up to 184 mph and can traverse the pavement from a rolling start to 60 mph in less than 4 seconds, according to Chevrolet.The Camaro ZL1 coupe presents strong competition not only for the performance versions of the Shelby Mustang GT 500 (starting at $50,000 now but with a new one coming next fall), but also the Cadillac CTS-V  coupe or sedan (rated at 556 horsepower or  415 kW), which makes the Cadillacs just as fast, arguably roomier and they  start at $64,090. For the record, Camaro has consistently outsold the Mustang since its introduction, reversing decades of Ford Mustang pony car dominance.

Since Camaro ZL1 borrows heavily from the advanced technology used by Cadillac CTS  and the more expensive performance versions of the Chevrolet Corvette, this will likely spur some lengthy discussions among enthusiasts debating which car is the better value. GM is betting there are three different buyers here and enough of them to keep all the super car lines profitable – a not unreasonable wager.

A Camaro ZL1 recently ran a 7:41.27 lap at the Nürburgring, almost 40 seconds quicker than a Camaro SS tested at the German track in 2009.  The Camaro ZL1 used for the lap was a production-intent model, with no performance modifications, driven by Camaro Performance Engineer Aaron Link. The Camaro ZL1 recorded its time of 7:41.27 from a flying start.

The Camaro joins a production Dodge Viper SRT10 ACR (American Club Racer) that posted a 7:12.13 lap time on the12.9-mile Nürburgring Nordschleife last month, that was faster than a  2012 Chevrolet Corvette ZR1, which  posted a lap time of 7:19.63  back in June.

This advanced technology package was first introduced on the Corvette ZR1. With Performance Traction Management, the launch control feature – manual transmission only – automatically modulates engine torque for the best-possible acceleration without excessive wheel spin. When the driver pushes the throttle to the floor, the system holds a predetermined engine speed until the driver releases the clutch. Then, the system modulates engine torque 1,000 times per second to maximize the available traction. When cornering, the driver can apply full throttle when exiting a corner and Performance Traction Management will automatically manage acceleration dynamics to maximize exit speed based on available traction.

The Camaro ZL1 is available with six options: