Posted on 3 January 2012 by Kenneth Zino

With the demise of the flagship Lincoln Town Car this year, the lackluster Lincoln line is relying on the full-size MKS and an upcoming freshened mid-size MKZ, which debuts in concept form at NAIAS in Detroit in January, to carry the brand. Car Spy Jim Dunne has caught a camouflaged version of the 2014 MKS – or is it the 2013 MKZ – with all new sheet metal, during testing in Michigan.

The semi-fastback look is a departure from the Town Car’s formal roofline, and is working what are by now well-worn styling themes that first reappeared on the wildly successful Mercedes-Benz CLS a decade ago. First shown at the Geneva Motor Show, CLS took the low and sleek look away from a then floundering Jaguar, which was losing money by the billions for then owner Ford Motor Company, which was about to introduce a boxy Jaguar XJ sedan. Ho-hum… 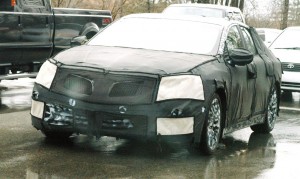 Ford now has slim prospects in the near luxury and luxury segments of the business where profit margins are traditionally fat.

Following the Ford Jaguar debacle, success is also not a word that can be applied to Ford’s management of Lincoln, which is a poseur in the world of luxury cars dominated by the German Brands and Toyota’s Lexus. Even though Lexus was out of the U.S. market for five months this year because of the Japan earthquake, Lexus still managed to outsell Lincoln by a better than 2:1.

Thus is the sorry state of Lincoln, a once proud brand founded by Henry Leland of Cadillac (1902) interchangeable parts fame. Lincoln has sold a mere 77,000 vehicles through November, off 18% in a market that’s up 10%. About 11,000 were sales of the Lincoln MKS models; 25,000 the entry level MKZ. There’s no question the Lincoln brand is in trouble. Lincoln’s attempt to add the latest electronic features – the ill-conceived, defect- ridden My Lincoln Touch telematics system – caused Lincoln (and Ford with its clone) to plunge to below average in quality ratings this year. (See Ford Employees to Beta Test Latest My Ford Touch Patch and Vehicle Dependability at Record, but Electronic Problems Grow)

With My Touch, the driver needs to take his eyes from the road to the center-stack touch screen for the manual control of functions. The voice activation is a joke. There is something over 400 voice commands listed in the Owner’s Manual. Who could ever remember even a fraction of those? Rather than improving safety, My Touch actually degrades it. (See FrankenFord Monster Loose In “Dearborn” Terrorizing Peasants and Threatening Public Safety On the Roads) 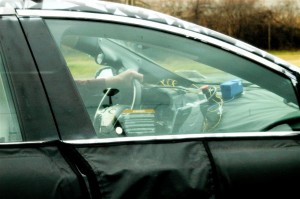 What are the two lenses doing on the a-pillar?

Coupled with the well-deserved demise of irrelevant Mercury this year, Ford now has slim prospects in the near luxury and luxury segments of the business where profit margins are traditionally fat. Nonetheless, Ford claims it will eventually revive Lincoln with new products, but simply re-badging Ford Taurus, Flex and Fusion models – the current Lincoln formula which put it on the road to ruin – will not work.

Even though the Lincoln prototype shown here is covered in camouflage, the changes slated for the new model are a departure. From the side, the MKS looks bigger than the current car. The question remains whether in full production dress is the MKS able to take on Buick or – in a stretch – Cadillac? Forget about German Car buyers.

Cadillac has already shown its new luxury sedan – Cadillac XTS Sedan Unveiled with a V6 and All Wheel Drive – which debuts next spring ahead of the new Lincoln with what looks like the same stance and themes. So what is Lincoln’s unique selling proposition? Is Lincoln fast following Cadillac or is it traversing the same road as Mercury?