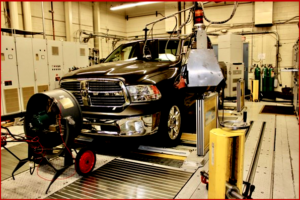 CARB’s recent screening tests and investigations have uncovered several systemic violations. In general, CARB has found that manufacturers have failed to submit required information about their engines and vehicles during the certification process and following certification in-use. Manufacturers are required to submit complete and accurate information according to California Code of Regulations (CCR) sections and test procedures incorporated in the CCR sections for mobile source categories.

The California Air Resources Board (CARB) today sent a letter to automakers and other vehicle and engine manufacturers “encouraging them to disclose” by the end of the year 2020 any unapproved hardware or software programs that impact emissions control systems in vehicles sold in California, aka auxiliary emission control devices or AECDs.

The move comes as CARB nears completion of a new testing lab that gives the agency greater ability to detect these unapproved programs. Given the sorry history of so-called cycle cheating on CARB and EPA compliance tests, it’s not surprising that CARB is increasing efforts to protect public health and reduce combustion pollution. CARB is also immune from the federal machinations of the Trump Administration to roll back, cancel or ignore the negative effects of air pollution on people, communities and the planet itself.

The law is elegantly simple: Prohibited in any form, defeat devices are undisclosed modifications that shut down or reduce the effectiveness of vehicle emissions control equipment under normal driving and vehicle operation. Following their discovery of defeat devices in Volkswagen diesel vehicles in 2015, CARB staff developed additional, sophisticated detection and testing techniques to identify undisclosed software programs, known as auxiliary emission control devices or AECDs, and other unapproved changes in software and hardware that can affect emissions. (CARB OKs Plan to Mitigate Harm from Volkswagen Diesel Defeat Devices. Heavy-Duty Vehicles to Get Clean Technology, CARB Fines Flagship, a Ford Specialty Vehicle Maker,)

CARB has since found similar issues with other manufacturers as part of its ongoing enforcement efforts. These violations have resulted in settlements involving substantial fines and recalls fixing or removing illegal modifications and mitigating  the environmental impact of excess emissions.

AECDs are designed to change the operation of emissions control equipment when required by specific, sometimes extreme driving conditions and generally are designed to protect the engine – for example, when a truck is pulling a maximum load uphill in hot weather for an extended period of time.

If fully disclosed when the vehicle is being certified for sale in California, an AECD may be legal as there may be a technically justified rationale for its limited use. But if the modification is not disclosed, and CARB detects it during its extensive surveillance and testing procedures, it is considered a violation of the certification process.

In its letter to manufacturers, CARB makes clear that admission by manufacturers by the end of the year of any undisclosed modifications that impact emissions – including submitting false data, unapproved recalls or technical (field) fixes, and incorrect testing or calibration of the onboard diagnostic system – will be taken into consideration when deciding how to assess updated penalties.

“Voluntary disclosure will trigger a reduction in penalties. Failure to do so may affect the result of future enforcement actions involving your company when CARB’s new techniques – and its new state-of-the-art testing laboratory opening in 2021 – inevitably detect any violations you may have,” the letter said, signed by Deputy Executive Officer Steve Cliff,

CARB continues to investigate on- and off-road manufacturers and urges all manufacturers to voluntarily disclose any potential violations of which they are aware by the end of the year. After that time, maximum penalties may be invoked.

CARB test procedures require manufacturers to, among other things, list all AECDs installed on their vehicles, including those that are activated by faults (e.g., default actions). An AECD is defined as any element of design which senses temperature, vehicle speed, engine RPM, transmission gear, manifold vacuum, or any other parameter for the purpose of activating, modulating, delaying, or deactivating the operation of any part of the emission control system.

CARB test procedures require manufacturers to include a justification for each AECD, and rationale for why each AECD is not a defeat device. A defeat device is any AECD that reduces the effectiveness of the emission control system under conditions which may reasonably be expected to be encountered in normal vehicle operation and use. An AECD may not be a defeat device if (1) the AECD conditions are substantially included in the Federal emission test procedures; (2) the need for the AECD is justified in terms of protecting the vehicle against damage or accident; (3) the AECD does not go beyond the requirements of engine starting; or (4) the AECD is present only for emergency vehicles and the need is justified. Unless any of these conditions are met, the AECD is a defeat device.

CARB test procedures and regulations require manufacturers to, among other things, report changes to emissions related hardware and software, including changes to the on board diagnostic (OBD) system, that are different than what was described for the certified vehicles and engines. Manufacturers must report changes to CARB that occur on the assembly line and changes they implement in the field.

CARB has found that manufacturers are failing to timely complete their MST and/or submit the test data to CARB, and has also found instances where parts have been swapped out before conducting MST demonstrations without proper notification and CARB approval. CARB is also concerned that manufacturers are not completing their in-use verification program (IUVP) and heavy duty in­use testing (HDIUT) obligations on time and/or in compliance with the regulations.

CARB must review and approve voluntary, influenced, and ordered emissions recall plans before these are implemented.

Certification is predicated on all information submitted to CARB being true, accurate, and complete. Manufacturers must use the applicable test procedures.

The OBD systems, through the use of a(n) onboard computer(s), monitor emission systems in-use for the actual life of the vehicle/engine, and must be capable of detecting malfunctions of the monitored emission systems, illuminating a malfunction indicator light (MIL) to notify the vehicle operator of detected malfunctions, and storing fault codes identifying the detected malfunctions. The OBD regulations require manufacturers to conduct Production Engine/Vehicle Evaluation Testing and to report the results by deadlines specified in the regulations. Another issue of concern is that CARB has found manufacturers calibrating diagnostics that would allow for threshold component malfunctions to be detected during certification test cycles but not during in-use driving.

An adjustable parameter on a motor vehicle or engine is any device, system, or element of design that someone (especially consumers) can adjust that affects emissions. It must be disclosed at the time of certification. CARB may test vehicles or engines in any setting of the adjustable parameter to ensure emissions compliance. Adjustable parameters may include settings that alter air/fuel ratios (e.g., idle air-fuel ratio adjustment screw), turbochargers, threaded adjustments, and special transmission modes.