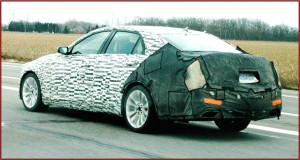 Is the new Cadillac CTS really this large?

Look for Cadillac to unveil this car at the New York Auto Show next month. I caught these camouflaged versions while they were out on a recent prototype test run in the frozen north. The new 2014 CTS appears to be close to a full-size sedan, but still keeping some hints of Cadillac’s distinctive angular design themet & science.

This new CTS is a significant departure from the first two – successful – versions of the CTS, which straddled what was then the compact and mid-size German luxury car segments. (Read AutoInformed on Driving the Cadillac CTS-V Coupe and Cadillac Returns To SCCA GT Racing With CTS-V Coupe)

The Germans have since gown fatter, so to speak, with the new BMW 3-series moving up a size. No surprise, then, that the new Cadillac is chasing the Germans by waxing larger, too, tasking on teh larger BMW 5-series sedan sedan while maintaining its rear-wheel-drive configuration. Does this mean the compact Cadillac ATS – the size of the last generation BMW 3-Series – also grows larger in its next iteration as well? 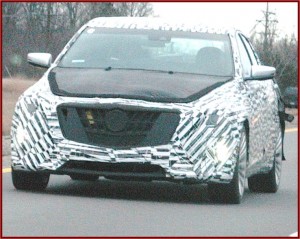 The size of the 2014 Cadillac CTS appears close to that of the current production XTS?

CTS design changes are most prominent in the front view. A much larger grille opening – the current automotive cliché – with a large, centered Cadillac crest is an attempt to identify the car as one of GM’s prestige sedans. If you look closely, you may discern the top of the new front fender line, which is separate from the line of the hood. Sixteen (?) and ten-spoke wheels are part of the new look.

If you compare the different grilles for their different air intakes, you can see that the mostly white-camouflaged CTS has much of the grille blocked. This indicates a smaller engine with less need for combustion air. 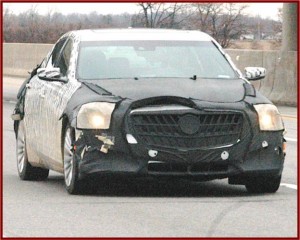 The front view of the other CTS with the camouflage peeling back from the grille has a much larger intake area, likely for a bigger engine – as in CTS-V. The current V car has a 556-horsepower (415 kW) 6.2-liter V8. This rear-drive CTS-V can actually run with the world’s best – a wolf in Cadillac’s “arts and science” exterior clothing. An all-wheel drive version is also available, and will no doubt be offered on the new CTS. The larger rear wheels also indicate a V performance model.