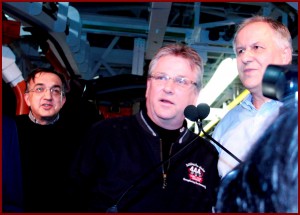 Pressure is greater at Chrysler and General Motors since the companies are more dependent on Canadian production for U.S. sales than Ford Motor.

Canadian Auto Workers are on the job today without a contract at Chrysler and GM factories after the CAW reached a tentative agreement with Ford Motor Company late yesterday in Toronto. Ford because of its European, Mexican and U.S, production for North American vehicle sales was less vulnerable to a strike than Chrysler and GM, both heavily dependent on Canadian operations, but has been less belligerent of late in its union negotiations.

Thus far, what is known of the Ford contract represents mixed results for the union, which was fighting a defensive action since talks opened in August. In spite of a strong push to reduce wage costs by all the automakers, the union retained its base pay and got cost of living bonuses. However, the controversial two-tier wage system that union members decry as divisive not only remains in place but is extended. Under the new contract,  new hires start at 60% of full pay and only reach parity after they are on the job for ten years – up from six years in the expired deal. New hires will also be enrolled in a modified pension plan, rather than the defined benefit plan current workers have. These could pose ratification problems. A similar deal remains controversial at the UAW in the U.S., which was successful last year in getting a two-tier contract renewed in spite of member opposition, but not without some fierce local opposition.

The CAW told its members that it has decided to extend “indefinitely” the deadline as long as there continues to be progress made at the bargaining table. CAW also said that if talks stall, the union at any time can give the company or companies 24 hours notice of an intended strike.  “This extension comes with the intention of reaching a new tentative agreement and avoiding a work stoppage,” Canada’s largest private sector union said. It’s a tacit admission of just how fragile the recovery in the automobile business is and the union’s self interest in survival.

The new four-year national labor contract at Ford covers 4,500 unionized employees in Canada. CAW president Ken Lewenza said that Ford will create 600 new positions in Canada at a press conference late Monday in Toronto, giving some hope to 800 of his members who are currently laid off. The four-year agreement says employees are eligible for a $3,000 bonus after ratification. There are also $2,000 cost of living bonuses annually in 2013-2015.

The CAW is asking Chrysler and General Motors to accept the same deal. Both companies provided little comment, other than to say they are studying the Ford contract.