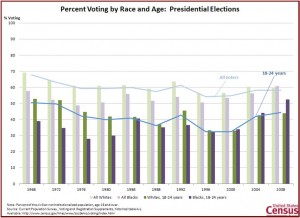 Fewer than 60% of U.S. citizens bother to vote.

All the graphics are based on previously released tabulations from the November Voting and Registration Supplement of the Current Population Survey. Noteworthy are the extremely low rates of participation among large numbers of people of all backgrounds. The visualizations are available at http://www.census.gov/hhes/www/socdemo/voting/publications/historical/index.html