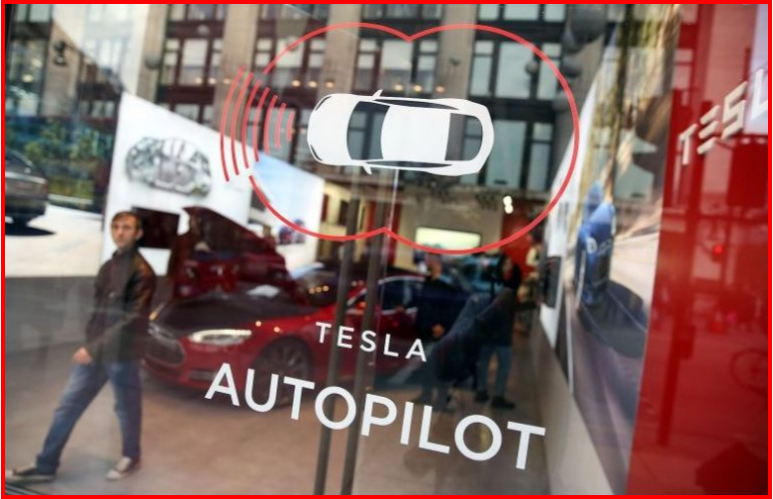 A toxic mix of what is advertised, what the software does, what is perceived or projected, and what non-computerized people actually do while driving.

The Center for Auto Safety and Consumer Watchdog have renewed their call to the Federal Trade Commission to investigate “dangerously misleading and deceptive practices and representations of Tesla Motors, Inc. regarding the safety and capabilities of its Autopilot feature.”

Since the consumer groups called on the FTC to investigate one year ago, another American has died (that makes three known fatals), others have been injured, and “many more have acted recklessly as a result of deceptive practices by Tesla making their owners believe that a Tesla with ‘Autopilot’ is an autonomous vehicle capable of self-driving.”

“All new Tesla cars have the hardware needed in the future for full self-driving in almost all circumstances. The system is designed to be able to conduct short and long-distance trips with no action required by the person in the driver’s seat.”…

“The future use of these features without supervision is dependent on achieving reliability far in excess of human drivers as demonstrated by billions of miles of experience, as well as regulatory approval, which may take longer in some jurisdictions. As these self-driving capabilities are introduced, your car will be continuously upgraded through over-the-air software updates, according to Tesla promotional materials.

“To be clear, it is not (autonomous),” say The Center for Auto Safety and Consumer Watchdog. The consumer groups made similar requests to the Attorneys General of California, New York, Florida, Michigan, Utah, and Massachusetts.

Center for Auto Safety and Consumer Watchdog claim that Tesla’s representations of its Autopilot feature continue to violate Section 5 of the FTC Act, as well as similar state statutes, because “they are materially deceptive and are likely to mislead consumers into reasonably believing that their vehicles have self-driving or autonomous capabilities. The letters state that Tesla’s and Elon Musk’s public statements regarding Autopilot mislead and deceive consumers.”

“Last year we asked the FTC to stop Tesla’s continued deceptive use of the term ‘Autopilot’ before there were more deaths and injuries because of an over-reliance on non-autonomous technology,” said Center for Auto Safety Executive Director Jason Levine. “One year later, there has been more unnecessary, preventable tragedy, and more intentional deception by Tesla, including claims of ‘full self-driving capability.’ If the FTC, and the states, do not stop these unlawful representations, the consequences will squarely fall on their shoulders.”

Use of the name Autopilot continues to create confusion among consumers. A recent study by the Insurance Institute for Highway Safety (IIHS) examined consumer understanding of advanced driver assistance systems, including Tesla’s “Autopilot.” IIHS concluded that “the name ‘Autopilot’ was associated with the highest likelihood that drivers believed a behavior was safe while in operation, for every behavior measured, compared with other system names.” Notably, 48% of respondents believed that it was safe to take one’s hands off the steering wheel when using Autopilot, compared to a maximum of 33% for any similar system mentioned.

The death of a Tesla driver on March 1, 2019 in Delray Beach, Florida was almost identical to the fatality three years earlier Williston, Florida of another Tesla driver. In both instances, an over-reliance on features that were deceptively described as an “Autopilot” directly contributed to their deaths.

The FTC and these state Attorneys General must open formal investigations Tesla’s unfair and deceptive practices so that consumers have accurate information, understand the limitations of Autopilot, and operate their vehicle safely and without endangering themselves or other drivers, passengers, or pedestrians on the road,” said The Center for Auto Safety and Consumer Watchdog.