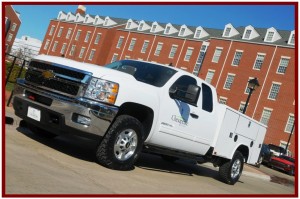 The natural gas-powered truck fleet will be used by field operations teams in Oklahoma.

Chesapeake Energy Corporation (NYSE:CHK) has completed the conversion of its 800th vehicle to use compressed natural gas as a fuel, as part of a program for the Oklahoma-based company to convert all of its 4,200 vehicle fleet to use the alternative fuel. Chesapeake is the second largest producer of natural gas in the United States. It is just the latest example of a small but growing movement to use compressed natural gas in fleets.

Unlike the volatility in gasoline and diesel prices most recently caused by turmoil in the Middle East, the price of CNG remains steady at $1.39 per gallon of gasoline equivalent in Oklahoma.

Gasoline and diesel prices are approaching $4.00 per gallon in Oklahoma. The company says it will realize annual savings of at least $11 million once the entire Chesapeake fleet has been converted.

The first phase of the program involved converting the Chesapeake fleet in Oklahoma was completed last week when the company’s 800 natural gas vehicle entered service. The natural gas-powered truck fleet will be used by field operations teams working the company’s drilling programs in the Anadarko Basin in western Oklahoma.

According to a Congressional mandate, increasing amounts of renewable fuels must be used in the U.S. and taxpayer subsidies totaling billions of dollars are being deployed – thus far – to make it possible. Under the Energy Independence and Security Act of 2007, the Environmental Protection Agency – currently under assault by Republicans who want it out of fuel economy and greenhouse gas regulations entirely- is responsible for revising and implementing regulations to ensure that  among other things  gasoline sold in the United States contains a minimum volume of renewable fuels. EPA is also active in promoting and subsidizing a whole range of energy alternatives, including CNG.

President Obama directed federal agencies to ensure that by 2015 all new vehicles purchased for the federal fleet of 600,000 will be alternative fuel, hybrid or electric vehicles. Chesapeake when it announced plans in May of 2010 to convert its fleet to CNG, joined many major U.S. companies, including UPS and AT&T, which have already converted portions of their fleets to natural gas. All of Chesapeake’s top 15 senior executives drive natural gas vehicles.

In 2010, Chesapeake and its fuel retail partners opened 14 public CNG stations throughout Oklahoma, bringing Oklahoma’s public available CNG stations to 42. The company said it expects hundreds more stations to open across the country in the next few years to support the transition to CNG by large fleet operators.

The second phase of Chesapeake’s alternative fuel plan will include the conversion of its fleets in North Texas and Louisiana to CNG. The company plans to replicate its successful model in Oklahoma by partnering with local fuel retailers in these areas to build public CNG fueling stations. Phases Three and Four of the initiative call for converting the company’s fleets in Pennsylvania, West Virginia, Colorado, Wyoming and South Texas.