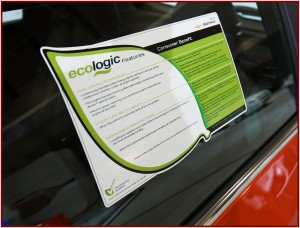 Chevrolet is the first automotive brand to include a label on its vehicles that lets customers see green claims about manufacturing and recycling that are not directly linked to actual driving.

Chevrolet says that all its vehicles sold in the U.S. will come with another window sticker touting environmental aspects of the vehicle, manufacturing processes used, as well as recycling potential. The promotional “ecologic label” appears on the rear driver-side window of 2012 Sonic cars beginning in March, with a rollout on new 2013 model Chevrolet vehicles later this year.

Whether consumers or General Motors will derive any clear benefits from the stickers remains to be seen. The Environmental Protection Agency and the Department of Transportation are also in the process of  vastly expanded the amount and type of information on legally required window stickers, starting with the 2013 model year. Critics of the new stickers claim they are confusing since they contain so many different types of data.

This is the first major change since the EPA label program began and it now provides detailed comparative information of fuel costs and fuel savings among models, which in theory will pressure automakers to become more efficient. There’s even a “QR Code” that will allow users of smartphones to access online information about how various models. (See EPA, DOT Unveil New, “More Useful” Fuel Economy Labels)

However, the new label sticks with misleading, miles per gallon ratings. More valuable gallons or liters per mile ratings are already available on the EPA website. (http://www.fueleconomy.gov/) The mpg rating is misleading when if you compare numerical fuel economy improvements instead of actual fuel costs.

Chevrolet is the first automotive brand to include a label on its vehicles that lets customers see green claims about manufacturing and recycling that are not directly linked to actual driving.

Each claim on the Chevrolet-created labels is audited by Two Tomorrows, an independent business that provides “auditing and assurance services” to companies for touting environmental initiatives.

“Customers want companies to be honest and transparent about their environmental efforts and sustainability goals, and rightly so,” said General Motors North America President Mark Reuss. “Putting an Ecologic label on each Chevrolet is just one more way for us to share our environmental progress.”