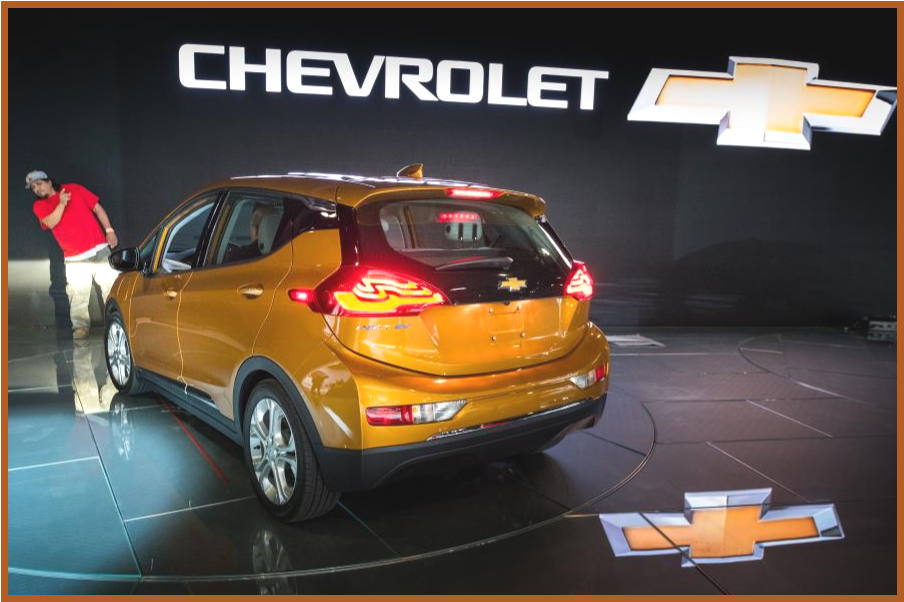 A Chevrolet Bolt EV is loaded onto its display stand Tuesday 15 November 2016 in preparation for Automobility LA – the press and trade days preceding the Los Angeles Auto Show in California.

Chevy says the Bolt will have an expected MSRP starting below $37,500. This compares to the Nissan Leaf at $29,000 to $37,000. These prices do not include, tax, title, license or optional equipment.

GM is hoping a taxpayer subsidy via a federal tax credit of up to $7,500 will make the EV saleable in what is currently a moribund market segment. Actual savings from the federal government depend on individual income and tax brackets, of course, on all EVs. Year-to-date Nissan has sold 7,922 Leaf EVs in the U.S. market, which is tracking above 17 million units annually. That’s a -36% decline year-over-year.

The Renault-Nissan Alliance, is the world’s leader in EVs, of course, accounting for half of the EVs sold worldwide. It has sold more than 350,000 electric vehicles since December 2010 when the Nissan Leaf went on sale. The Alliance passed a milestone in August by setting an industry record of 100,000 EVs sold in a single year. The Nissan Leaf remains the industry’s best-selling EV ever, with more than 230,000 units sold globally. Renault is the best-performing EV brand in Europe.

Some of AutoInformed on Bolt and EVs

Ken Zino is an auto industry veteran with global experience in print, broadcast and electronic media. He has auto testing, marketing, public relations and communications expertise garnered while working in Asia, Europe and the U.S.
View all posts by Ken Zino →
This entry was posted in electric vehicles and tagged 2016 Los Angeles Auto Show, autoinformed.com, Chevrolet Bolt, Ken Zino. Bookmark the permalink.