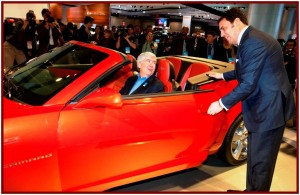 The Camaro Convertible will appear on the field during the postgame celebration in North Texas.

The Most Valuable Player of Super Bowl XLV between the Green Bay Packers and Pittsburgh Steelers on February 6 will receive a 2011 Camaro Convertible, Chevrolet today announced.

A media panel and votes from  fans will determine the MVP Award winner, which will be announced during the Super Bowl XLV Postgame Show on Fox.

The Camaro will be a taxable gift to the MVP, who will  work with Chevrolet on delivery timing and the color and equipment.

The Camaro Convertible will appear on the field during the postgame celebration in North Texas. It comes with either a 3.6-liter Direct Injection V6 engine, or as a V8-powered, 426-hp SS model.

Controversy surrounds this years Super Bowl, when it was revealed that women at the Ocean Sky “sweatshop” in El Salvador are paid just eight cents for each $25 NFL T-shirt they sew, according to the National Labor Committee.

Their wages amount to just 3/10ths of one percent of the NFL shirt’s retail price, according to the non-profit pressure group. One wag suggests that this gives a whole new meaning to one Super Bowl team – the Steelers.

The auto industry is a major advertiser supporting the NFL of course. And the NFL Players Association (NFLPA) is an AFL-CIO union that represents all professional football players, past and present.

The NLC says the “lack of accountability on the part of our U.S. corporations–now operating all over the world and the resulting dehumanization of this new global workforce is emerging as the overwhelming moral crisis of the 21st century.