The actual pace car requires no performance modifications to run at Indianapolis.

A Chevrolet Camaro Convertible will serve as the pace car of the 2011 Indianapolis 500. Chevrolet and Indianapolis Motor Speedway officials made the announcement at the Barrett-Jackson Scottsdale classic auto auction yesterday, where a bidder will have the opportunity to purchase the first of 50 Indianapolis 500 Festival Committee cars this Saturday night.

The 2011 Camaro Convertible is the 22nd Chevrolet chosen to pace the race, and the seventh Camaro. Both the 100th anniversary of the first Indianapolis 500 and Chevrolet occur in 2011. Chevrolet. Arthur, Louis and Gaston Chevrolet all competed at the Brickyard during its early years. 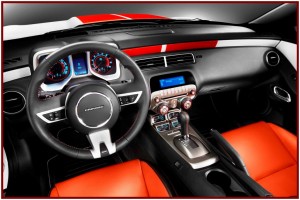 The power-folding top retracts in about 20 seconds.

The color combination is reminiscent of the design used on the 1969 Camaro Indy pace car – replicas of which are now among the most popular Camaros in the collector world.

Chevrolet will donate auction proceeds to the David Foster Foundation, a charity devoted to supporting families with children in need of life-saving organ transplants. David Foster, the 15-time Grammy-winning music producer and songwriter, founded the organization in his native Canada. The auction will be carried on the Speed channel during the 8 pm EST segment of Speed.

The pace Camaros also have the RS package, which includes HID headlamps and unique tail lamps.

Regular production versions of the 2011 Camaro Convertible arrive in Chevrolet dealerships in February. Camaro ended 2010 as the sales leader in its sporty car class in the United States for the first time since 1985.